BEST OF 3: YA Fiction Faves by Anton Marks, Author

I love Young Adult fiction and that’s why it’s very difficult for me to choose my favourites. So here goes. My best three YA books feature two books from some years back and one very current work. 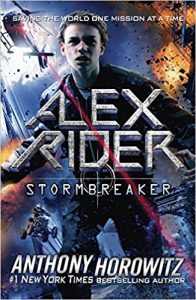 Alex Rider is a hero of mine. Created by the highly prolific Horowitz. The fourteen-year-old super spy fulfilled a dream of many young men and women as we vicariously lived the extraordinary adventure of the teen spy. Storm Breaker the first in the series is everything a spy novel should be, action packed and filled with plot twists and turns. The character of Alex Rider is sophisticated enough to keep you happily guessing about his motives and what he will do next. Great villains and adrenaline fuelled action. What more could you ask for.

2) Harry Potter and the Chamber of Secrets by JK Rowling

This book is a magnum opus for me. The Harry Potter character and all the others who make up this fascinating world of magic, is done so well it is hard to picture all the rejections she received on the way to having it published. I think one of the gifts this book and the series keeps offering is a belief that you too could be a part of Hogwarts and maybe you’re not a Muggle after all. It’s worldwide success in every form it has been produced is a testament to the craftsmanship that went into creating the characters and adventures. My ability to identify with the story’s emotional heart makes this a perennial favourite of mine.

3) Children of Blood and Bone by Tomi Adeyemi

This is an imaginative debut with a lovingly created world. Toni used her parents’ African culture to conjure up a glorious story using unique characters and infrequently used Africa mythology to create a compelling story of magic and revenge. There is so much potential for tales from African inspired worlds and this was done so well, it’s my third choice.

BIO: Anton Marks is an author based in London.  His self-styled Urban Fantastic genre is speculative fiction using crime, action adventure, horror, sword and soul and sci-fi to highlight the black experience through the lens of the extraordinary. At present, he has eight books in the Amazon Kindle store, Dancehall, Bushman, Bad II the Bone, In the Days of Dread, 69, Messiah, Chauffeurand a Young Adult Sci-Fi/Fantasy novel called Joshua N’Gon: The Last Prince of Alkebulahn written as Anthony Hewitt. The second in his Bad II the Bone Series Good II be Bad is due in 2018. 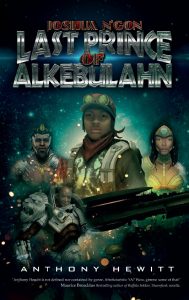 When a secret world of ancient alien kingdoms and evil corporation’s clashes with adolescents, school, and homework. You won’t be able to put down this wild adventure of discovery, friendship, and coming of age!

What would you do if you discovered you were descended from ancient alien African royalty and you could hold the key to save your friends, family, and the world from evil destructive forces?

Joshua N’Gon seemed like an ordinary boy. Raised in a loving foster home in north London and a gifted student at the St Augustine private school. But as he grew older, a thirst for meaning and true purpose began to grow greater and greater…

On Joshua’s tenth birthday he received mysterious packages from his birth parents. Parents who had left him as a baby under mysterious circumstances. Opening the packages, he would find gifts that would forever change him both mentally and physically. Magical technology unlike anything he had ever seen and the best part, only he could use it. But his secrets would not stay that way for long. Evil forces were gathering and they would stop at nothing to acquire the powerful science behind his amazing inventions

With the help of his two best friends, Brick and Mina, Joshua sets out to develop his abilities, find his real parents and stop the Technology Billionaire Kanu Umbekwi from subjugating the planet.

Buckle up and get ready to go on an exciting thrill ride, full of suspense, mystery, and alien technology with Joshua N’Gon: The Last Prince of Alkebulahn.