BOOK VERSUS FILM: I Am Legend Showdown 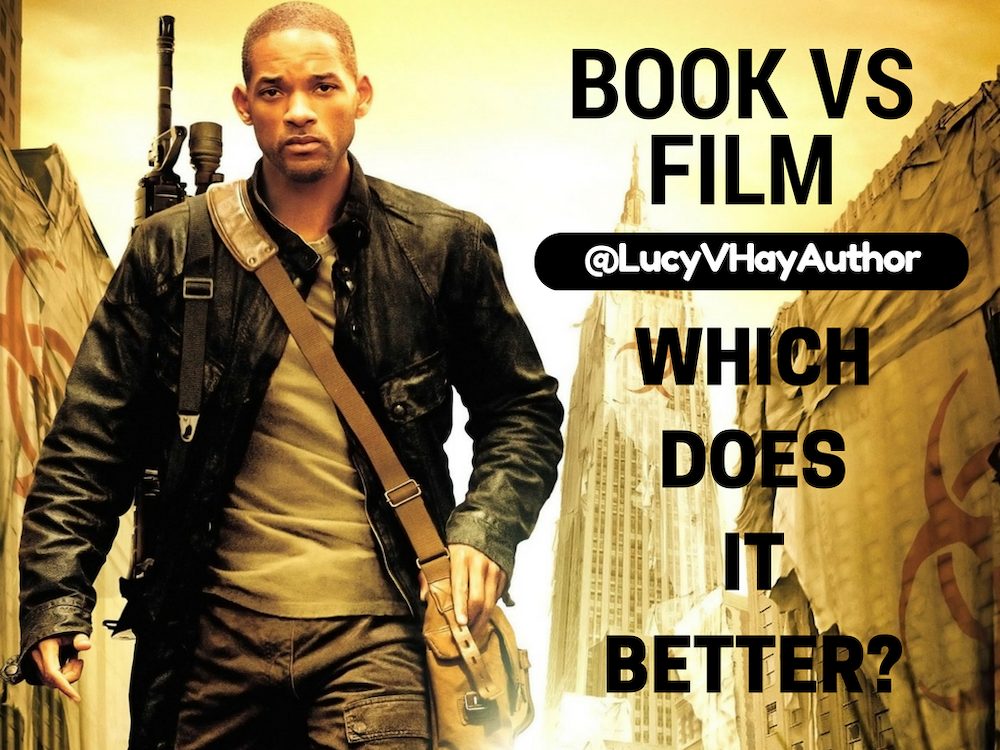 I first read I Am Legend, by Richard Matheson, when I was in my late teens and I thought it was brilliant. At the time of reading, and I think this is important to keep in mind, I was coming off the back of Isaac Asimov and Philip K. Dick, Robert Heinlein and Kurt Vonnegut, Alfred Bester and the like. I was reading the authors whose ideas would go on to shape the future of speculative fiction in both film and television in ways even they couldn’t have dreamed of. And those guys could dream.

I Am Legend blew me away. It gave me a scenario I was vaguely familiar with (though the saturation of today’s dystopian world-scape was a few years away yet) and a main character I could get behind. And if I felt he was a little cold at times, well that was fine.

One of the benefits of reading something written by a different generation is the amount of leeway you can give the settings and behaviours when it comes to things like technology, social structures and motives. As long as they’re serving a central plot that really fires your imagination. 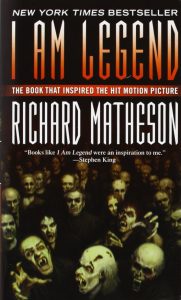 For those of you who are unfamiliar with the work, I Am Legend tells us about Robert Neville, the apparent sole survivor of a pandemic that kills off most of the population, turning those it doesn’t kill into something resembling vampires. The cause of the pandemic is war related, and though these days the implication of chemical warfare wouldn’t need to be explained in any great detail, Matheson uses dust storms and mosquitos as his conduit.

Whilst Neville may have the city of Los Angeles as his playground during daylight hours, he is a lonely man, constantly on the verge of insanity, struggling to impose some sense of order onto his life. He spends his days seeking out the nests of vampires and dispatching them with a stake through the heart, and his nights barricaded in his own home, beset and besieged by this new breed of terror.

We learn through flashbacks the fate of his family (his wife and child died in the pandemic, then he had to kill his wife after she returned as a vampire), and of the relationship he builds with a stray dog. Though it only lasts a week and, it’s fair to say, doesn’t end well.

For me though, it’s at its end where this book is most powerful. I remember well, the revelatory feeling I had after putting the book down, the sense of having experienced something profound. 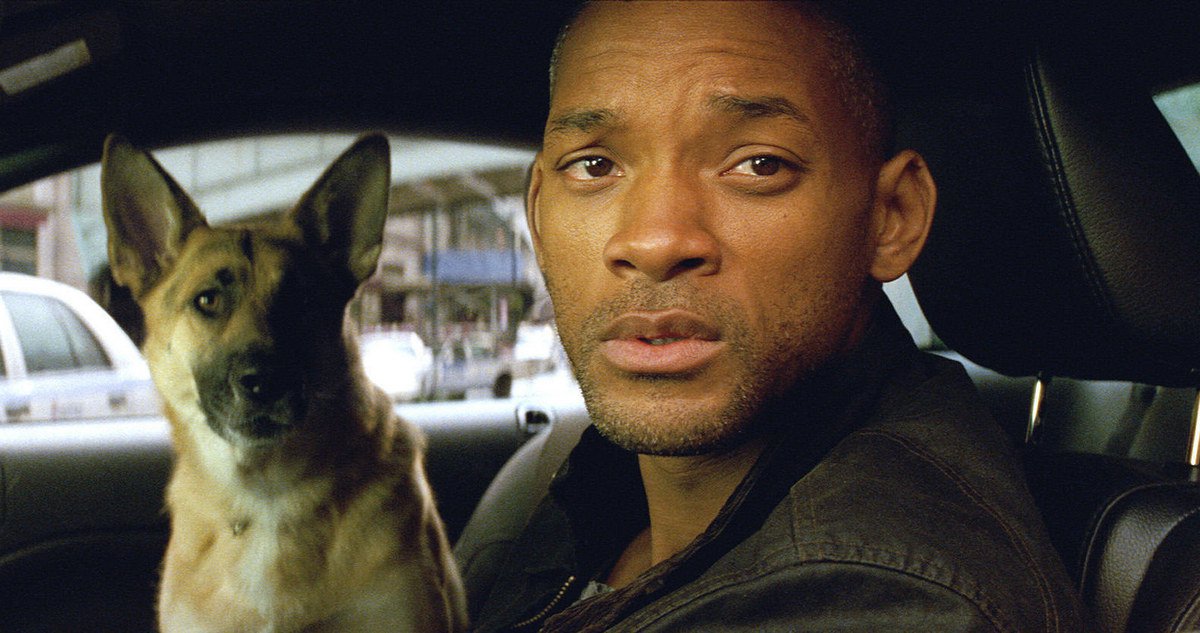 In the film, Will Smith plays Robert Neville, a government scientist who finds himself at the epi-centre of an outbreak in New York. He refuses to leave the city because he’s convinced he can find a way to reverse the disease and cure people, and he believes Ground Zero is the place to do it from.

It’s a fantastic performance from Smith. I’ve always rated him as an actor, but in this he shines. Indeed, he has to carry the film for huge parts of it, not because of a substandard script or poor pacing, but because he’s the only person in it. In the scenes where he visits the video rental store for example, and we discover he’s placed mannequins in strategic places to have conversations with them, he gives us a glimpse into the psyche of Robert Neville. At any time, he could take all the videos back to his house and view them at his leisure, but he doesn’t, he gives himself a reason to get out, to take a break from the madness, and interact with ’people’ again.

Following an incident which involves his dog chasing a deer into a seemingly abandoned building, Neville ‘kidnaps’ a female vampire and takes her back to his lab to experiment on her. The Alpha male of the nest, showing signs of intelligence Neville is in denial about them having, lays a trap for him and after a skirmish which results in casualties for both sides, Neville finds himself at home with anger to burn.

There is a reckoning then, of some description as he goes out at night seeking the vampires. He’s at his lowest ebb here and resigned to death before a stranger and her son rescue him when it looks like all might be lost. Unfortunately, as she is taking him back to his house, unbeknownst to any of them, they are tracked by the vampires.

Which leads us to the final scene…

Though I’m a librarian by trade, I’m also a huge film fan and for me I Am Legend scores highly in both formats. I first saw the film in the year of its release, 2007. I believe there is merit to both versions of the story, and that the changes made for the film adaptation were, for the most part, beneficial and more suited to a modern audience.

Whilst the book gives you a great sense of what it’s like to be all alone, the film picks that theme up and runs with it. Though it shows us the death of his wife and child, I suspect it’s mainly because the film shows Neville in places we’re so used to seeing heavily populated, with commotion all around, that it resonates so much.

There’s a scene where Neville is playing golf on the wing of a military fighter plane, which is itself on the bridge of a naval vessel of some description, hitting golf balls into the emptiness. It’s a perfect image of where he finds himself in this new landscape. King of the world, perhaps, but also its only subject.

The film serves the story very well and looking at it through a modern eye, I think most of the changes they made in the adaptation strengthened the piece.

The relationship Neville has with the dog is all the better for us knowing both that it was a relationship that had built up over 3 years, not just a week, and, perhaps more pertinently, a link to his daughter.

However, with all that being said, the main difference between the film and the book, for me, still comes down to one thing. So let’s talk about the endings.

There’s two versions to the climax of the film.

Version 1: Big bada boom, Neville dies, as do the nest of vampires.

Version 2: Neville lives, as do the nest of vampires. Slight nod to the book in this ending, but I do mean slight.

It’s so easy to think that astute social commentary coupled with a plot twist, is a by-product of these more-learned times, but it isn’t, and in the final pages of I Am Legend, Richard Matheson absolutely nails it.

With his last page, he’ll have you shaking your head and smiling ruefully at how perceptive he’s been, how cleverly he’s crafted the story you’ve just read, guiding you away from the kind of observations you naturally turn from in your own life.

With his last line, he’ll make you sit down and think about everything you’ve just read from a completely different angle, and then wonder what it means for you and your own existence. You’ll muse upon it for days, years even if I’m anything to go by.

There were many improvements in the film, no doubt, and had they been brave enough to adhere to the original all the way through, then perhaps it would surpass the book in its telling. But it didn’t.

So for me, whilst I really enjoyed the film and have watched it a number of times since, the book will always hold top spot in my heart. I can’t escape the structure of that ending, the way Matheson delicately draws you in and then pulls the rug from under your feet.

No, the film was good, very good even, but the book … Legend.

BIO: To find out more about ThankBookFor, head to ThankBookFor.com. To listen to The ThankBookFor Hour, during which you can find our Film Vs Book Club segment about I Am Legend, head to www.wcrfm.com and click listen again. Tom Bissell is listed on the right-hand side. That’s me.

To tweet at me and tell me how wrong I am, @ThankBookFor or @TBFTomB.

3 thoughts on “BOOK VERSUS FILM: I Am Legend Showdown”