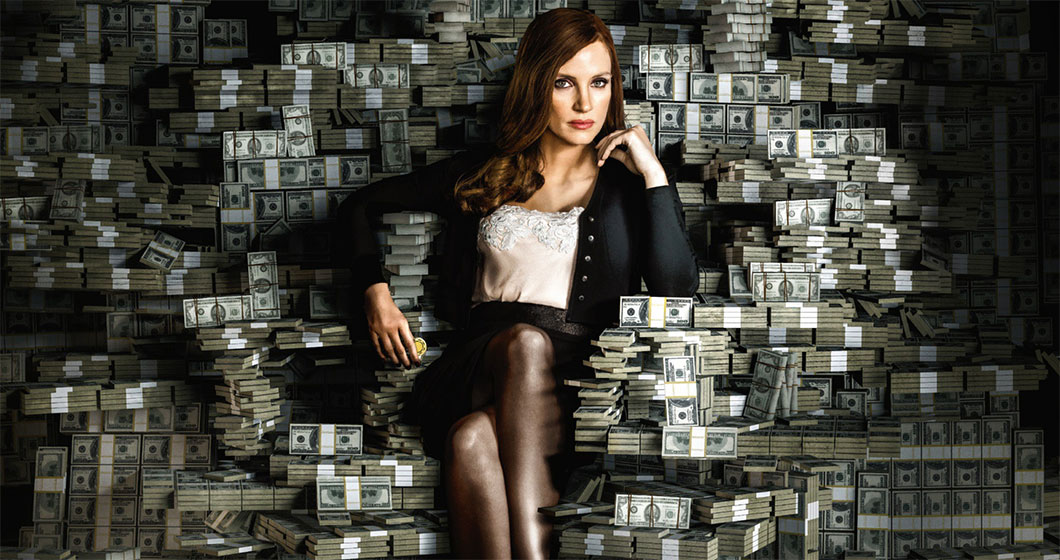 Molly’s Game tells the story of a young women who built one of the most exclusive, high-stakes underground poker games in the world. Billed as ‘an insider’s story of excess and danger, glamour and greed’, the book promises to be a no-holds-barred, behind-the-scenes look at the game, the life she created, the life she lost, and what she learned in the process.

I love memoir, plus I love stories with female leads who have done something spectacular, especially in a man’s world. Molly’s Game ticks all those boxes and more. There’s glamour, betrayal and high stakes. Hundreds of millions of dollars were won and lost at her table. Molly’s became the game for those in the know: celebrities, business moguls, and millionaire businessmen. Everyone wanted to play, but you had to have an invite. 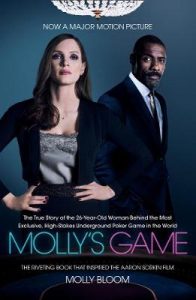 I liked this book a great deal. Picking it up, I wondered if she would go OTT on the poker element. I am not crazy about cards or games of any kind, so I worried I might get bored. I needn’t have worried. Though each section of the book is named after a poker term, Molly concentrates on the human aspect of her story. I found the most interesting parts were about her relationships … Not just with boyfriends Drew and Eugene, but also friends like Blair and her brothers.

I also really enjoyed her ambition in the book. Bloom is completely unapologetic about her desire to make as much money as possible. And why not? Ambition and ‘getting to the top’ is a character trait celebrated in male leads. (I did find it quite amusing how she kept going on about how impressed she was with all the luxury though, like she hadn’t grown up with much. She went skiing all the time, lived in a big house, had holidays abroad every year. Her Dad was a psychologist. From my POV, I’d say her parents were very well off!).

But best of all, Bloom name-drops like crazy in this book. Who knew Tobey Maguire (yes, Spiderman!) was such a jerk?? Or that Ben Affleck loved himself? Or that Leonardo DiCaprio was a bit weird, wearing headphones constantly at the poker table (okay, I might have guessed both of those). She also names a stack of other people from Todd Phillips (director of The Hangover movies); through to Rick Salomon (‘director’ and co-star of the Paris Hilton sex tape); plus a bunch of business guys who are apparently real (yes, I had to Google them).

Of course, Molly comes unstuck. She accidentally gets in bed with the Russian Mafia, gets beaten up by the Italian Mafia AND one of her players is basically crooked as hell and selling a Ponzi scheme. But hey, you play with fire, you get burned. I would have liked to see more about these developments, because the book does end very abruptly.

Overall however, this was a very fast read and a very enjoyable book for me. 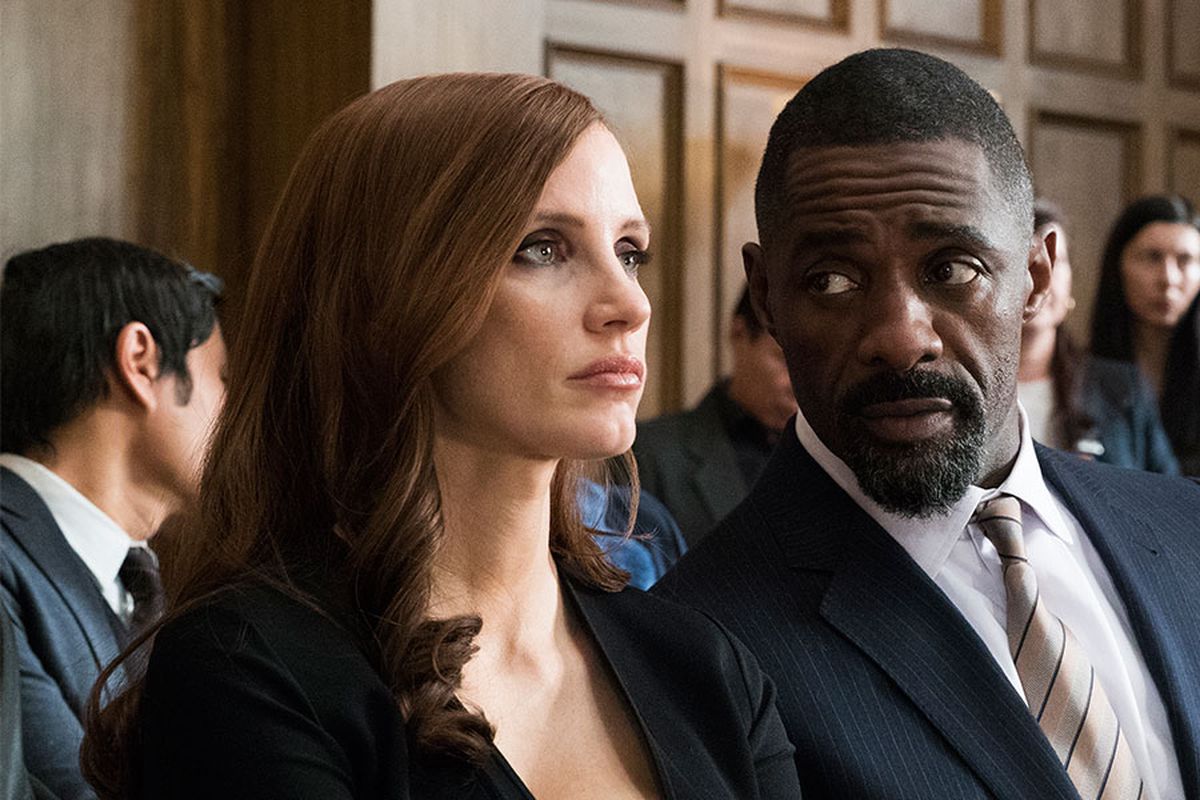 I was unsurprised to see it had been adapted: it’s an amazing story. The fact it had been adapted AND directed by Aaron Sorkin (The West Wing, The Social Network, A Few Good Men) and starred one of my fave actresses Jessica Chastain was the icing on the cake. It was a no-brainer I would enjoy it, surely?

It does start very strongly, with Bloom reflecting on her aborted skiing career. When she comes off her skis, we are treated to a voiceover that sets up what is to come. This is a movie predominantly from the inside of Molly’s head. As she finishes the prologue with a big fat ‘F.U’ – literally! – we are promised that everything we see will be from her POV, warts and all.

In one sense, this is true. There are significant departures from book: Idris Elba’s lawyer character Charlie was not present, nor was his daughter Stella. This in itself did not bother me. Elba is electrifying and he has great chemistry with Chastain.  Also, as a script editor, I realise stories sometimes need to invent characters that are both a ‘way in’ for audiences who have not read the book. What’s more, they may also be needed for audiences who have no understanding of niche subject matters, like poker. Molly’s Game has both, so creating an ‘anchor’ character like Charlie is an obvious choice.

What’s more, there’s lots of very clever allusions to the book. They play in ‘The Cobra Lounge’ for starters (it was The Viper Room, in real life). Most of the other ‘in-jokes’ come from Charlie in dialogue. They especially relate to THAT abrupt ending that bothered me so much: ‘You finished writing the book before the good stuff happened’ / ‘I need you to tell the story again, but this time not skip over the Russians’. He also says, surprised, ‘That wasn’t in the book’, when Molly confesses to becoming a drug addict. I also enjoyed the dramatic irony of Molly passing on 5 offers to make her book a movie due to ‘creative differences’. 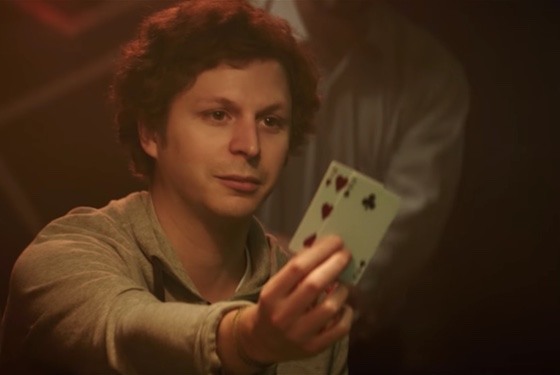 Most disappointing for me was the lack of focus on the characters who made the game so real, seedy and darkly glamorous, however. As you might guess, all the major players like Tobey Maguire are missing (I’m guessing he didn’t want to play himself, being such a jerk! Surprise!). Instead he’s played by Michael Cera (great choice) and referred to as ‘Player X’. Even so, he still doesn’t really come into play in the main narrative like he did in the book. It felt like his wings had been clipped. (Maybe Maguire threatened to sue, who knows).

There’s much more focus on the actual game of poker in the film, than the book. I found this rather distracting, just like I did the voiceover as the movie continued. It is also worth noting Molly never came off her skis in the book, like she does in that all-important prologue. In the book, she claims she could not get to the top of that game, but matched her brother’s athletic prowess, so quit while she was ahead.

She also claims in the book her parents were not behind her skiing after her surgery. In comparison, her father in the movie (played by Kevin Costner) continues to push her. He is barely in the book, but here in the movie he is very much a big presence. He appears in both flashbacks and ‘real time’, helping Molly come to an important realisation about her place in the world. The skiing prologue even comes back, book-ending the piece, which ended up providing a really great resolution in my opinion.

I also loved how the Dad makes reference to the fact she never wanted anything when she was growing up, just as I thought when I was reading: ‘Were those workhouses tough, Tiny Tim?’ Chastain also says the scene in which she confronts her father about whether he liked her brothers more than her is the ‘best film scene I’ve ever done’. I agree, it was very strong. Bloom’s family’s absences spoke volumes in the book as far as I was concerned … I felt there was something she wasn’t saying. With this in mind, I get the feeling this was the more ‘truthful’ depiction of why Molly ended up doing what she did. (Since the real Molly Bloom – pictured below, with Chastain – seems very happy with how the movie turned out, I would wager real money on this, too!). 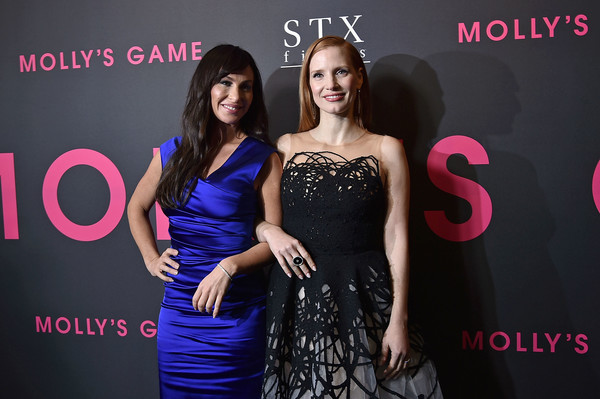 This is an especially tough one to call. On the one hand, Molly’s Game the book has what I wanted: a woman in a man’s world, unapologetic and kicking ass, making a stack of money. But it also meanders, then ends very abruptly, which was frustrating.

In comparison, the movie makes Molly much more human. I felt like she was someone I might know, rather than a glitzy babe. But the voice-over was totally overbearing, as was all the poker info. Plus at two hours twenty minutes, the movie was waaaaaaaaay too long.

So, I guess it has to be the book as it delivered what I wanted initially!

What Do You Think?