BOOK VERSUS FILM: Notes On A Scandal 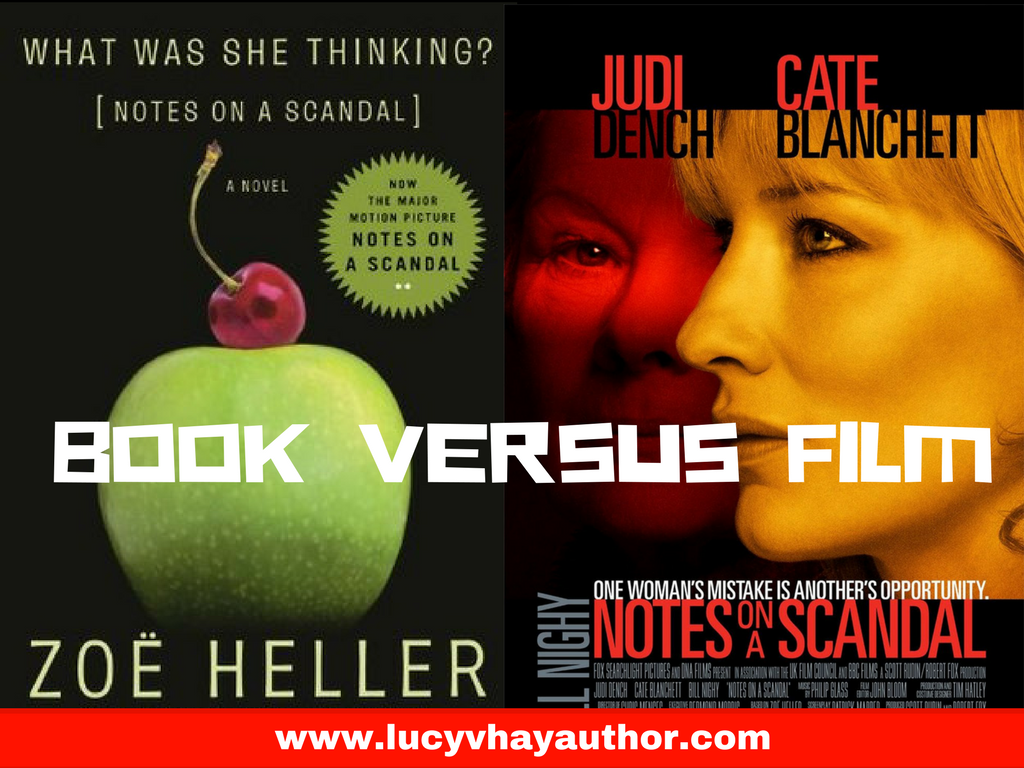 Notes On A Scandal tells the story from Barbara’s point of view when she becomes entangled with Sheba, a middle class housewife teaching for the first time in Barbara’s inner city school.

Shockingly, Sheba has an affair with a fifteen year old boy which proves her downfall. This is not because she ends up eventually in prison, but because of Barbara: jealous of her friend’s previous family life (Barbara is a spinster), she manages to unpick Sheba from her family and ensure that this fragile and foolish woman totally depends on her. Barbara is essentially a type of emotional vampire, wanting Sheba to herself at the expense of everyone and very chilling she is too.

Interestingly, this diary Barbara keeps starts off innocently enough; though Barbara is clearly somewhat childish from the off and malignantly spiteful, we don’t understand the depth of her distasteful personality or the lengths she will ultimately go to.

In the novel, it is more of a “slow burn”: she is an opportunist, capitalising on events as they unfold – waiting, very deliberately, for her time to come. When it does, Barbara betrays Sheba’s confidence, ensuring she is sacked from the school so the scandal comes pouring out, we get the feeling that this was more of a case of all the ducks lining up as if Barbara is some kind of sniper. She might be a predator, but she would have waited even longer if she had to. Just like people do in life.

It is by no means a perfect book; I was irritated by the constant Americanisms in the copy I read for example, where British middle classes said things like “real estate” and had “baked hams” for sunday dinner, (but perhaps the one I was reading had been destined for over the pond or the copy editor had had a bad day?).

But most of all, I finished Notes on a Scandal  super-fast because its characters ENTHRALLED me, particularly its anti heroine, the obsessively jealous Barbara Covett (whose name I thought was pure genius, ironic in a non-obvious way).

I was particularly interested to see how Barbara would be represented: surely an opportunist sniper would be unsuitable for the screen? Someone “waiting” would prove dull, unsatisfying drama I thought. Yet the screenplay by Patrick Marber had been nominated for a BAFTA and whilst I do not always like winning or nominated scripts, it’s not usually because they are not crafted well.

Somewhat inevitably, the adaptation is a reconstruction. Heller’s book is so celebrated, I don’t think moviegoers would have found a reimagining of the text so soon after publication palatable. Barbara is played by Judi Dench, an obvious choice I thought whereas the part of Sheba went to Cate Blanchett: I hadn’t seen anyone remotely like her in my head when I had been reading, yet she fit the part really well.

As set ups went, it is very true to the book: it establishes Barbara’s spiteful nature and her disillusionment with the education as a metaphor for her own failings in life. I spotted only one chunk of dialogue lifted from the book – Barbara’s disgust at what someone in her staff room mistakenly believes about Sheba’s father shows us what a petty, precise individual she is.

However Marber’s version of Barbara is subtly different to Heller’s. Whilst Heller tells us that Barbara is a kind of sadistic desperado, someone who needs someone no matter age, gender, sexual preference or intelligence as long as they are malleable, Marber paints Barbara as more of a sexual predator, in that Barbara is in love/obsessed with Sheba.

The camera becomes Barbara’s eyes at times: lingering shots of Sheba’s body, especially when she is dancing in the living room with her family, betray Barbara’s lust for her, as does a moment when Barbara touches Sheba’s wrists and forearm, making her feel uncomfortable (which I don’t recall from the book). 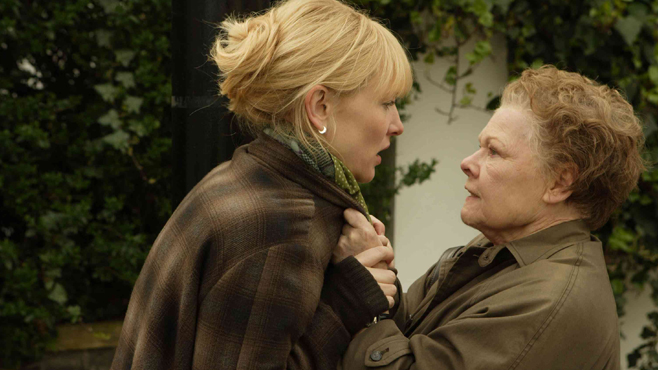 So in the film, Barbara is much more active: we get this impression she is “after” Sheba almost from the start once her spite is established. Events too come much more chronologically.

In the book, Sheba tells Barbara of her involvement with the fifteen year old some months after starting the affair, but in the film Barbara accidentally witnesses them having sex in the deserted pottery room at school. She calls Sheba and when Sheba feigns ignorance, Barbara’s “Let’s not, shall we?” proves particularly chilling.

From there Barbara actually orchestrates events, insisting first that Sheba breaks it off with the boy, but when she discovers Sheba has been unable to, Barbara decides to use it to her advantage. Marber does an excellent job of making the film SEEM like the book, when in actual fact it’s rather different!

In the movie, around the end of the second act, as Barbara’s cat lies dying and she wants Sheba to come to the vet with her, Barbara makes Sheba choose between going to her Down Syndrome Child’s school play or with her. Like any mother, Sheba chooses her child’s play, making Barbara actually decide to go to another teacher, Brian, and tell him about her “suspicions” regarding Sheba’s affair. In the book, this only happens because said teacher asks Barbara out on what she thinks is a date; she abandons Sheba momentarily, deciding instead to go for him. When he confesses he wanted to talk to Barbara because he is interested in Sheba, Barbara tells him about Sheba’s affair in a fit of pique. 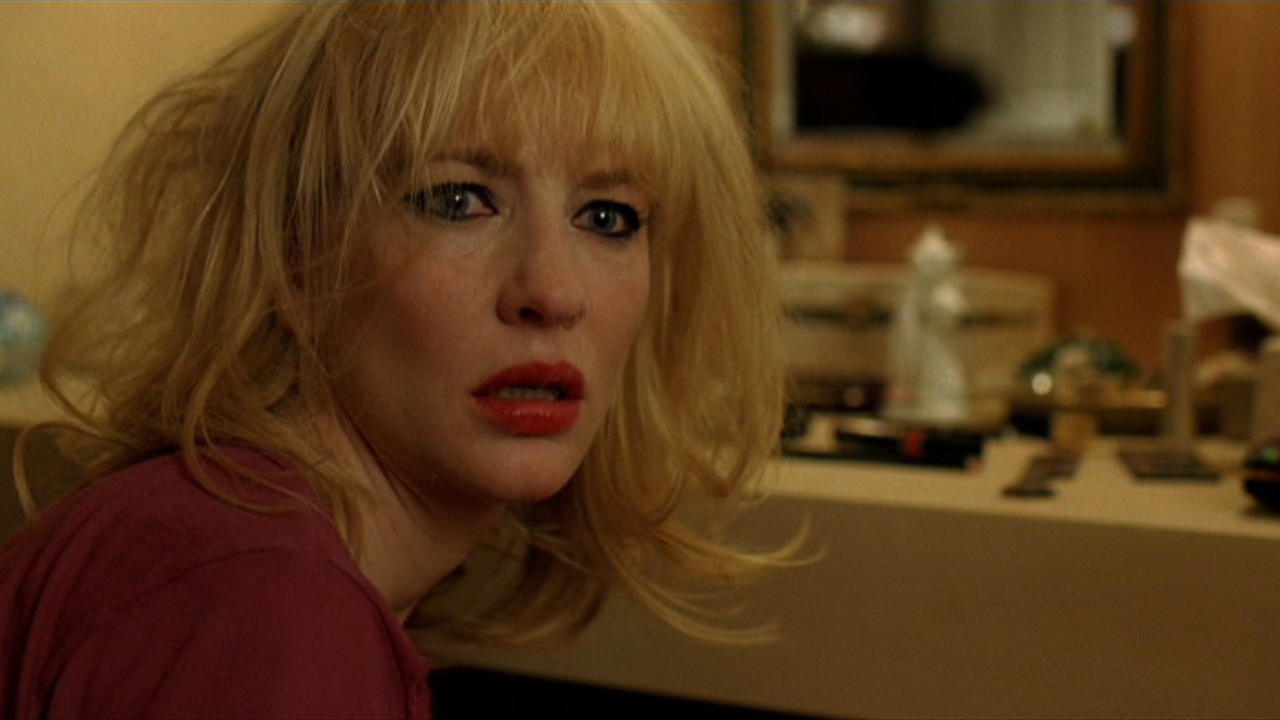 Where the film suffers then is in understanding Sheba’s motivation for having the affair in the first place. In the book, Sheba’s husband is a self satisfied godawful prig; her child who has Downs is a lot of work and Polly, her daughter is a total brat who gets herself expelled from a posh private school. She does not have a good relationship with her own mother and clearly looks to Barbara for guidance when she gets in over her head. There’s a particularly impressive moment when Polly flees to Sheba’s mother’s home and Sheba hits her daughter across the face; Barbara attends the scene and reports it in minute detail.

In the film, there is no room for this level of characterisation: Bill Nighy plays the husband as an affable, much older spouse who has lost touch with Sheba who feels dowdy and unappreciated, making it harder to know why she should choose a fifteen year old kid and not say, another teacher for her affair.

It also lacks that underhand ending – the notion that Barbara wins. We join the book with a foreword that describes the two women’s wait for Sheba’s trial, with Sheba outcast from her family completely. This is bookended by Sheba’s discovery of Barbara’s betrayal via the notes and her acceptance (for want of a better word) that she has been sewn up good and proper; there is nowhere else to run.

But by film logic, this is unacceptable and when Sheba there discovers the notes, she returns to her husband who graciously accepts her back and tries to work through her own betrayal. We see them pictured together on the front of a newspaper with news of Sheba’s sentence. But of course films like to pose the idea a leopard never changes its spots and has Barbara approach another woman, reading that newspaper …

All things considered however, I think this was an excellent adaptation and a great illustration of how a screenwriter needs to change certain elements for novels and films are different media. As an exercise, I learnt a lot and I hope my thoughts prove useful. As always though, it’s all a matter of interpretation.

Have you watched/read Notes On A Scandal? Which version did you like best?

7 thoughts on “BOOK VERSUS FILM: Notes On A Scandal”