Book Versus Film: Why MISERY Works As Both

Stephen King is the master of horror. The king of grim, the heir of scare, the duke of puke, the prince of mince… well, maybe not that last one! But this means he also has some fantastic book to film adaptions out there.

I’m a huge King fan. Not quite as infatuated as Annie Wilkes is with Paul Sheldon, but not far off!  For those who are not familiar with Misery, here is a summary of the plot.

Paul Sheldon is the writer of a popular romance series called Misery. He has a car accident in the middle of nowhere and Annie Wilkes (his number one fan) comes to his aid. Instead of taking him to the hospital this psychopathic ex-nurse takes him to her home and holds him captive.

While he’s ‘recovering’ from his injuries she reads his latest Misery book and is livid when she finds out he’s killed off the protagonist (Misery), thus ending the series. Annie keeps Paul locked in a room and forces him to write a new novel, ‘Misery’s Return.’ Paul does as she bids, all the while trying to think of a way to escape before the crazed Annie kills him.

Before we get started – there aren’t huge spoilers in here but there are some. I don’t mind spoilers because I’m a writer and it comes with the territory, but I’d hate to spoil the story for others. Ready? Let’s go … 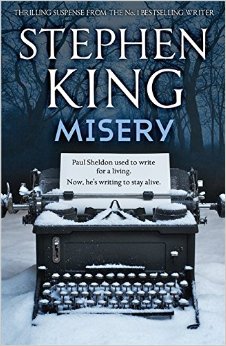 So, we know Misery is the protagonist in a series of romance novels written by Paul Sheldon. The title is a nice play on words but it could have more than one meaning. For me, it’s also about the misery Paul feels in having to continue writing the popular romance series long after his passion for it fizzled out, writing to please readers and fulfil his obligation to the publisher (a fictional gun to his head). Then Paul crosses paths with his number one fan, Annie Wilkes, and this concept is taken to a whole new level, piling on more psychological misery and adding physical misery to the mix.

Misery comes under the header psychological horror and the book lives up to this label. What the reader gains from the book is Paul’s thought pattern and not just what he is thinking about doing, but also an inner monologue from a third voice who is rather aggressive towards him. Paul seems to have two voices in his head. They are both his own, but one is an alter-ego, part of his self-loathing, which makes it seem like a separate entity jabbering away inside his head, slowly driving him crazy.

As King says, ‘The best stories always end up being about the people, rather than the event.’  Annie is etched into my mind. She is the star of this book, her dialogue shaping her. On the surface, Annie doesn’t look like a traditional monster, even though Paul makes it seem like she’s gruesome, with her cracked lips and stinky breath. Yet that’s precisely what makes her terrifying.

What makes Annie dangerous is that she doesn’t look/seem dangerous … at first. This narcissistic maniac is the lynchpin; if she’d been less colourful and layered the story would have lost its magic. Paul, on the other hand, could have been anyone. He’s just a regular guy and maybe that contrasts to how crazy Annie is.

The pace of the book was not fast enough for me. I don’t know if this is because I read it in the information age and not when it was released in 1987. I would have been seven-years-old and although already writing my own horror stories at that age, I was obviously not reading King yet. I expect to read fast-paced stories and I do struggle when they plod, no matter how rich the prose … but maybe that’s just me?

I could have easily enjoyed the book had King left some less important strands of information out. The Misery’s Return parts for example. I was uninterested in reading about Misery’s adventures. No wonder Paul hated writing about her. I imagine King did this for several reasons: to show how annoying Annie is for liking such trash; to show Paul’s struggle having to write with the letter ‘n’ missing off his typewriter and later the letter ‘t’; or to show another part of Paul’s torture, forced to sit and write something he’s come to hate. I almost skipped over and only read on out of fear of missing something important later in the book. It’s a minor gripe though and I’m being extremely picky because it’s hard to find weaknesses in SK’s work.

As mentioned above, I was bored by point 5 in this list, so I think the movie draws strength from us NOT having to read about Misery’s adventures! Instead, we only see an excited Annie asking Paul questions. Kathy Bates was perfect for this role. Not only does she look like the type of woman who would enjoy Misery stories but her body language and the way she delivers her lines is exactly like I imagined the deranged ex-nurse Annie Wilkes. King brought her to life on the pages and Bates did her justice on the screen.

I think the hobbling in the film was effective. Had they cut the foot off and blowtorched it, I don’t think that level of gore would have had the same impact as the block of wood and sledge hammer. It would have taken something away from the character Bates had created, pushed it too far in the insane direction for the viewers and made her less believable. Less was more in this case. I think this is also true of the scene with the lawnmower, which those dirty birdies left out of the film (but was my favourite part of the book!). 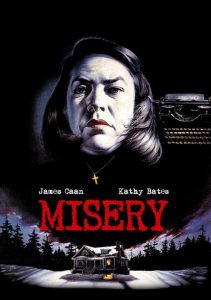 The script was true to the book. I liked that they kept Annie’s original dialogue. Words like: Cockadoodee, dirty birdy, mister man and oogie, weren’t compromised. The writers were also loyal to the plot. The film was clean, simple and ticked all the boxes. The location and set design were just as I’d imagined. Had they made the film grander than two characters and a room, I think it would have failed.

I thought Paul was uninteresting. I didn’t feel the same level of sympathy towards him that I did in the book. I wondered if this was the choice of actor, perhaps I felt James Cann wasn’t the right fit? But I think some of it is to do with the lack of inner voice: it was almost like an extra character in the book and for me, this wasn’t translated to film. I felt Paul’s pain and panic but I’m not sure I cared about him all that much. In the book, I was rooting for Paul to escape, not so much in the film. His descent into madness wasn’t there; he stayed relatively calm in the film. If I think about casting the film today I would cast Heath Ledger (if he were alive) or Idris Elba as Paul … Melissa McCarthy would make a great Annie!

Had the inner voice making Paul crazy been added, I think I would have felt more of a connection to Paul. I don’t know how they could have portrayed this better but I feel it was the only thing the movie lacked.

I like the book and film in equal amounts. Sometimes book to film can be disappointing but here we have a subject matter that translates from page to screen extremely well. Is it the simplicity of the story? Possibly. I think it’s also probably King’s genius and the right filmmakers and actors for the job.

By the way, as a writer,  the most miserable AND frightening part of both the book and the film was when Annie made Paul burn the only copy of his new manuscript. NO!!!

I think I’d have answered her request to torch my hard work with, ‘I’d rather die, you cockadoodee!’

BIO: Emma Pullar is a writer and book reviewer. Her picture book, Curly from Shirley went to number four on the bestseller list and was named best opening lines but NZ Post. As well as picture books, Emma writes horror, dystopian, sci-fi, fantasy and paranormal fiction. You can read her short horror story, LONDON’S CRAWLING, in the Dark Minds charity collection. Follow Emma on Twitter, HERE.

2 thoughts on “Book Versus Film: Why MISERY Works As Both”