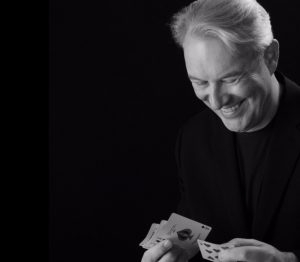 Hi. I’m John Lenahan. I’m originally from Philadelphia but came over to the UK in the mid 80’s where I met a girl, married a mortgage and forgot to go home. For a day job (cause all us successful writers have day jobs) I’m a comedian/magician.

In the 90s and 00s I was one of the resident MCs at London’s Comedy Store. These days I work as a comedian/magician on cruise ships where they only make me do two shows a week – I get lots of my writing done at sea. Oh yeah – I was the voice of the talking toaster in Red Dwarf – some people get excited when I tell them that!

I’ve had some success with a trilogy of YA fantasy novels called Shadowmagic – published by HarperCollins. You should try them even if fantasy isn’t your bag. I offer a money back guarantee. Send me an email saying “Shadowmagic is crap” (with a scan of a receipt) and I’ll send you a book token by return email.

It’s what I read. I spent my youth reading fantasy and sci-fi and now I’m writing
what I read most. Also there are too many people out there who seem allergic to books that have elves or ray guns in them. (For the record I have never written a book with a ray gun in it.) 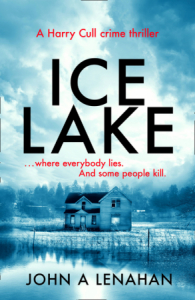 Ice Lake has at its core the issue of fracking (a controversial way of mining natural gas.) A small mountain community is being disrupted by big industry and lots of money. At the heart of the story are two brothers who jointly own acres of family land. One brother wants to sell the mineral rights and the other doesn’t – one ends up dead.

I travel so much it varies but my favourite place to write is off the ship in some tavern on a Greek island. Yes, my job is as good as it sounds.

The Lady in the Lake by Raymond Chandler.

“She looked playful and eager, but not quite sure of herself, like a new kitten in a house where they don’t care much about kittens.”

The sentence above… there’s one that good on practically every page.

1 thought on “CRIMINALLY GOOD: interview with author John A Lenahan”