Hi, my name is Paul Harrison, I’m a retired police detective with a career spanning three decades. I’ve also worked at the Royal Courts of Justice with High Court Judges, and with charities working in the support field for survivors of child sex abuse. Check out my website  HERE; plus you can follow me on Twitter as @PaulHarrisonAuthor.

My latest book is Revenge Of The Malakim. It’s high summer and the streets of Bridlington East Yorkshire are awash with tourists. A serial killer is on the loose. DCI Will Scott and his team embark upon a fast paced investigation to catch a killer with a unique agenda. As the body count rises the killer randomly moves location and the police are unwittingly drawn into a dark and sinister world where cover-ups and corruption reigns. A place where no one can truly be trusted and nothing is ever what it seems.

I’ve written 34 non fiction books too. Most of these are listed on my website; the vast majority are true crime. I’ve also written a couple of biographies, such as Leeds United footballers Billy Bremner (Keep Fighting) and Albert Johanneson (The Black Flash).

I’ve spent almost 25 years interviewing serial killers and writing true crime. Believe it or not, interviewing those killers became rather banal, boring! With so much knowledge of what makes serial killers tick and why they kill, I decided to create my own monsters: serial killers and murderers with a
difference. They are much more interesting than the real thing, and of course, the fictional police force generally come out on top!

It’s wonderful, creating an alternative world full of characters who you can control. That’s all very good in theory, however, my characters tend to write their own stories. That’s what it seems like, anyway.

I had a police career spanning three decades, so I worked on many high profile cases during that time, including murders. I didn’t realise it at the time, but that experience would later be invaluable to my crime writing. I also worked with the Judiciary at the Royal Courts of Justice, London. 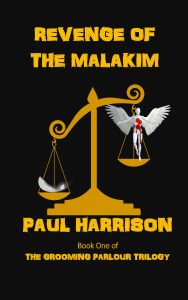 I generally work through the day: early morning seem to be my most creative writing period. I never know how the book will end, until it’s finished. I know that sounds bizarre! However, I insert twists and turns, that changes the direction of then story which often culminates in a very different ending to that I had originally tried to plan.

Many years ago, I was in the police force, and had written my first true
crime book. It was about the Victorian serial killer of East London, Jack the Ripper. As a result of that book, I received a letter from Reggie Kray (of the infamous Kray Twins).

I struck up a good friendship with him and would often visit him. Reggie asked me if I would consider writing a book about him and his twin Ronnie Kray. He put me in touch with many of the legendary ‘firm’ and I was offered access all areas, and the ‘truth’.

As a then-serving police officer, I had to seek authorisation from my Cheif Constable to write this book. Sadly, he told me I would have to resign to do so. I couldn’t take the chance of losing the security of a job that paid my mortgage and offered a good pension at the end of it. So I contacted Reggie and told him my decision. He was great; he said he understood (although he thought financially, I was wrong, and making a mistake!). He was right. Someone else wrote the book and made an absolute fortune!

I was invited to see Reg on his forced release from prison, due to his  failing health. It was there, close to death, that he referred to me as his favourite crime writer and someone unique: a copper he actually respected!