This guest post was originally on the awesome CrimeFictionLover site! To view the original, CLICK HERE or on either of the pics below. Enjoy! 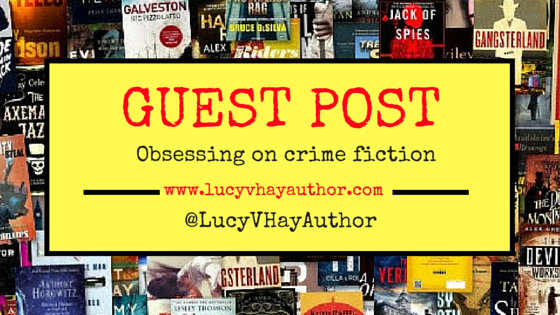 ‘Narrator’ is defined in the dictionary as ‘a person who narrates something, especially a character who recounts the events of a novel.’ But what if our narrator is not a flesh and blood person at all, but a ghost, corpse, life essence, angel or metaphysical being, instead?

Authors have long explored the notion of an afterlife, whether they believe in it themselves or not. The idea of a world ‘beyond’ the physical realm is rich for potential conflict and character arcs, so it’s no accident the ghostly narrator has become entrenched in crime fiction, past and present.

Here are five ghostly narrators of the last fifteen years or so in crime fiction, which are YOUR favourites? Be sure to let us know in the comments section! 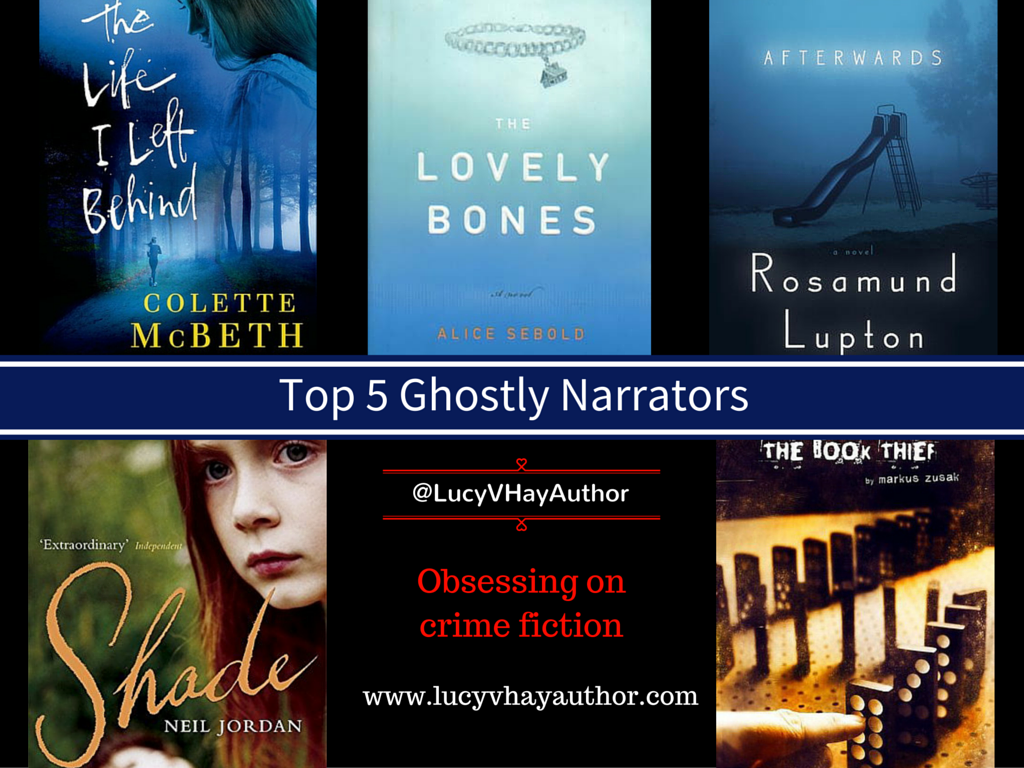 1) The Life I Left Behind by Colette McBeth

NARRATOR: Eve, a journalist. Savvy and capable, Eve doesn’t know when to quit … and this gets her killed, but why? Only the repressed memories of another woman can help Eve rest in peace.

‘I know who attacked her … It’s the same man who killed me’ is the tagline for this impressive novel about an event dating back six years that ultimately ends in murder.

When Melody Pieterson was attacked and left for dead, only a chance encounter with a dog walker saved her life. With Eve looking into the case, she’s not convinced Melody’s neighbor and close friend David Alden is really  guilty of the heinous crime. But the evidence is so compelling that even Eve wonders if she’s barking up the wrong tree in her own investigation.

But after meeting with David soon after his release from prison, Eve is murdered in an attack almost identical to Melody’s. Helpless and unable to intervene for the first time in her life, Eve can only hope Melody will remember what really happened six years ago, so her killer might be brought to justice. But Melody has become a virtual recluse since her attack … does she have the strength to unveil the murderer?

Suspenseful and visual, The Life I Left Behind is the perfect ‘whodunnit’ for mystery lovers. Read my full review (no spoilers) HERE or click the title above.

2) The Book Thief by Markus Suzak

NARRATOR: Death. We can all become sick of our jobs and Death is no exception in this story, but he has no replacement so must continue. Claiming he is ‘haunted by humans’, he talks of removing souls and carrying them away.

If you grew up in the eighties and nineties like me, you may think first of Death as the dude from comedy sequel Bill And Ted’s Bogus Journey! But Death in The Book Thief is nothing like that wise-cracking dude with the painted face and black cape.

Death narrates the story of Liesel Meminger, a ten-year-old girl living in Germany during World War II. Unlike many novels set in the time period which are relentlessly bleak, Death describes both the beauty and destruction of the WW2 era, marking it out from many of its contemporaries.

A foster child and grief-struck orphan, Leisl arrives at the home of Hans and Rosa Hubermann. They try and protect Leisl from the horrors of the war and the Nazi regime. As the political situation in Germany deteriorates, The Hubermanns hide a Jewish man named Max, putting the family in danger.

The title refers to Leisl, who steals books The Nazi Party seek to destory. Hans teaches Liesl to read in secret. Recognising the power of language for herself, Leisl shares the books she’s stolen with Max, as well as writing her own. Through a love of the written word, Leisl copes with the trauma of her past and embarks on a journey of self discovery. MORE: Best of 3: Classic Crime Picks

NARRATOR: Nina, who might seem generous and ‘respectable’ but she hides a mean streak that has plagued her since childhood and will tear her and her friends apart.

Neil Jordan is perhaps best known for his Oscar-winning screenwriting with The Crying Game in 1992. Jordan has a filmmaking history dating back thirty five years with critical acclaim, not to mention a vast array of awards and accolades … So you could be forgiven for wondering how Jordan fits novel writing in as well!

With a fiction output of six novels (so far!), it’s Jordan’s Shade that brings his work into this list of ghostly narrators. The story is told by Nina Hardy, an actress who is murdered in the opening scene of the book. Whilst her corpse lies hidden in a septic tank, Nina recounts her tale of two pairs of siblings growing up in Ireland in the first half of the century, leading to Nina’s gruesome death in the 1950s.

There are shades of Lenny from Steinbeck’s classic, Of Mice And Men to Nina’s murderer and childhood friend, George. George has been mentally and physically scarred by his experiences in The Second World War and Jordan makes some nuanced commentary about the nature of post traumatic stress disorder on WW2 veterans. What’s most compelling however is Nina’s own acceptance of her own role in her death, because it’s ultimately a murder revealed as the opposite of the senseless crime it seems. MORE: Best of 3: ‘Mental Health Matters’ – Crime Fiction themed around trauma.

4) The Lovely Bones by Alice Sebold

NARRATOR: Susie. Naive and trusting, Susie meets her death one day after school and has to put her faith in her father to discover what really happened, so she might rest in peace.

Is it possible to discuss ghostly narrators without mentioning this book? I don’t think so. The Lovely Bones is the story of a family devastated by a harrowing and terrible murder — recounted by its teenage victim, Susie.

But Susie isn’t ready to release her hold on life just yet. We join her and keep vigil as she watches her family and friends as they struggle to cope with a reality in which she is no longer a part. Lured to an underground hiding place by her murderer, the crime is laid out first. The reader knows what Susie’s family does not and we’re desperate for them to catch up, so Susie’s killer can be found and brought to justice.

Popular culture often paints men as being emotional illiterates, but to her great credit, Sebold has shaped one of the most loving and sympathetic fathers in contemporary literature – his quest for the truth about his little girl’s death is mesmerising. So, whilst upsetting in nature, first-time novelist Alice Sebold takes this difficult material and delivers a compelling and accomplished exploration of a fractured family’s need for peace and closure. MORE: BEST OF 3: ‘Home Is Where The Hurt Is’ – Crime Fiction set in & around the home.

NARRATOR: Grace. Described in newspaper terms throughout the book, ‘A thirty nine year old mother of two”, Grace struggles with her identity as a wife, mother, friend and human as she tries to find out who tried to kill her daughter in an arson attack on the school.

Taking The Lovely Bones conceit of the ‘angel-like’ narrator and running with it, Lupton introduces a new twist: Grace and her seventeen year old daughter, Jenny are badly hurt in a fire and end up in comas. It’s Grace’s spirit or ‘life essence’, caught in limbo, that narrates the story after she receives a head injury.

Both Grace and Jenny discover they can trail after their loved ones around the hospital. If they can bear the pain, they may leave the hospital and travel to their home and other places too, so Grace builds up her tolerance in order to be with her husband, Mike and her sister in law, Sarah who is a police officer as she tries desperately to find out who would commit arson.

In the hands of a lesser writer, Grace and Jenny would have been entirely passive characters, with events only happening ‘to’ them. But Grace and Jenny perform vital functions in the narrative and are even party to information Sarah is not. Grace must also make one final, devastating choice that seals her character as one who might have lost her way a little in life, but in the ‘netherworld’, she is in control and doing what she does best: being a mother. Read my full review (some spoilers), HERE or click the title above.