Top 5 Twisted Sister Stories To Creep You Out

I read a LOT of books involving sisters for my research for my crime debut, The Other Twin and to get into ‘the zone’! They seem to be everywhere at the moment … This is one trend that shows no sign of slowing down!

So, to celebrate The Other Twin being recently released, I thought I would reflect on five of my favourite recent ‘Sister’ stories – how many of these have you read, too? Don’t worry if you haven’t read them yet though, there’s NO SPOILERS: 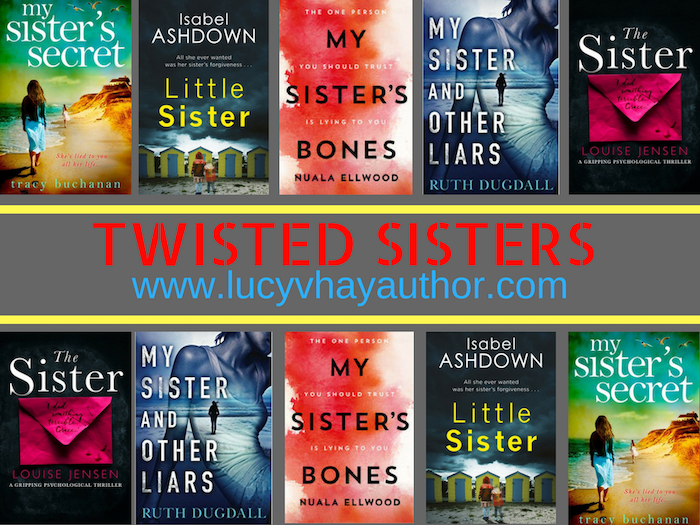 1) My Sister’s Bones by Nualla Ellwood

I wasn’t sure what to expect with this one … and it plays with your assumptions throughout! It’s a clever tale, with thought-provoking commentary, but it’s still easy to digest. I devoured it very quickly, mainly thanks to the three-dimensional characters and the situation they find themselves in. Protagonist Kate is a war reporter, so the scenes in Syria are hard-going, yet it’s the ones in her backwards little hometown that are the creepiest!

2) My Sister’s Secret by Tracy Buchanan

I have three sisters myself and they can be secretive beasts, so reading this was a no-brainer for me! I enjoyed this tale of intrigue, set in a seaside town and focusing on a family bereavement. The diving sequences in the submerged forests were especially creepy and claustrophobic, plus the characters of the three sisters in this story were appealing. Recommended.

This book is set on the Isle of Wight, a place I know particularly well, so the storyworld really added something for me. But even if I hadn’t known the island, the author really ratchets up the tension here in this child abduction thriller: it’s a twisty tale with a relentless, fast pace. There have been LOTS of missing child thrillers in recent years, but this one really stands out for me because it’s always one step ahead – I am pretty good at figuring out twists, but this one really GOT me!

4) The Sister by Louise Jensen

This one is *slightly* different to the rest on this list in that it doesn’t involve the protagonist’s own sister, but her deceased best friend’s! I really liked the intrigue here – when Grace finds a note, written a long time before best friend Charlie’s death, it reads: “I did something terrible Grace. I hope you can forgive me …” I was BESIDE MYSELF with wanting to know what this *terrible something* was! Great job.

5) My Sister And Other Liars by Ruth Dugdall

My personal favourite on this list, this is a devastatingly authentic read. Dugdall never shies away from grabbing the dark and taboo with both hands and she excels here, confronting issues of self-harm, anorexia and domestic abuse. Told via the POV of Sam, a girl intent on starving herself to death, she must confront her memories and work out who could have attacked her big sister Jena – and why. As you might expect from this author, the ‘showdown’ is quite something in that it may take you somewhere VERY uncomfortable! 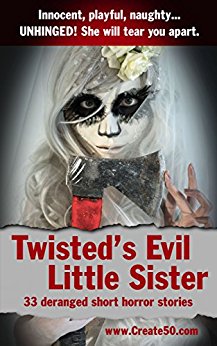 Twisted50 is a crowd-sourced collection of fifty horror stories – I took part last year and was thrilled when my story, The Retribution of Elsie Buckle was picked for the anthology. However, there were SO MANY great entries that the people at Create50 – the initiative behind Twisted50 – created another anthology, Twisted’s Evil Little Sister, Vol 1 AS WELL! So obviously no round up of ‘sister’ books would be complete without this evil tome … There are some real sick minds behind this volume, it creeped me out to the max: you have been warned!