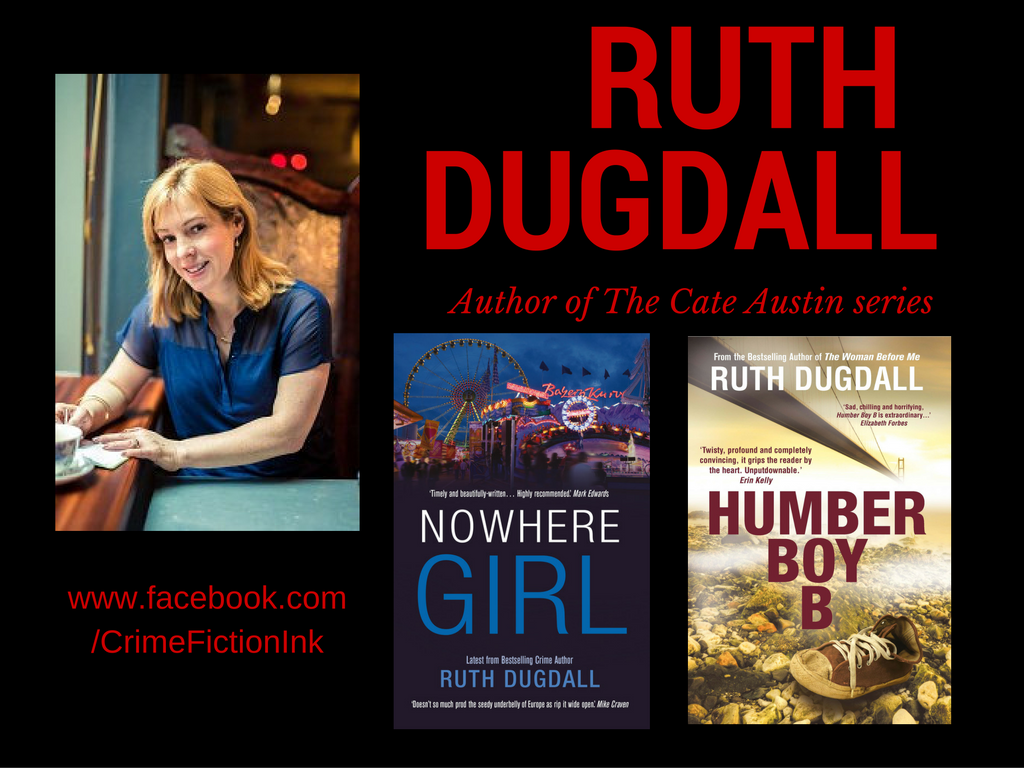 1) Is Cate based on anyone? She’s such a GREAT character.

As you know, Cate is a petite (short!) probation officer with red hair…so far, so autobiographical. And of course I was able to use my working knowledge, and my fears, and put them in Cate’s head. When I wrote Nowhere Girl she became my voice; all of my fears about living in a foreign land became her fears … so I do feel close to her.

2) Who is your own favourite author and what is your favourite series to follow?

My favourite crime author is Gillian Glynn. Her best book is Sharp Objects. I don’t really follow a series of crime books … though I like Sophie Hannah’s books, and they feature the same characters.I do tend to prefer stand-alones. I’m a big fan of Alex Marwood, and I love all of her novels.

3) You went the self publishing route to start with, but was your Cate Austin series rejected many times before it was taken on by Legend Press?

My first Cate book is The Woman Before Me, which won the Debut Dagger in 2005. I was signed by an agent and courted by publishers…so I gave up the day job and the book was submitted. Disaster! What a crazy idea, to think it would be that easy. Of course, it was rejected by everyone. So I made changes and the same thing happened. It wasn’t until 2009 that I won the Luke Bitmead Bursary, so my book was published, by the wonderful Legend Press in 2010. That’s 5 years of rejections for a book that had won a prestigious award. And it hasn’t got any easier over the years. It’s a tough game, as everyone (wiser than me) knows. So I shouldn’t have given up the day job.

4) How much did real-life cases affect your writing of Humber Boy B and how much research did you do?

I always knew I’d write about children who had killed. I worked in a prison for such kids for two years, back in 2000-2002. So it took me many years to actually finish the book, though the idea was bubbling away. I think I needed to be in the right place, and any sooner would have been wrong for me.

5) Have you ever thought a book should be one way for it to have written itself in a completely different direction?

All the time, but this is the sheer joy of novel writing. That moment when it takes you somewhere unexpected. I don’t plan; it would kill something for me.

6) Have you ever listened to any of your audio books and how did you feel hearing your words narrated back to you?

A dangerous question! Because the same actress reads all of my books, and she reads them beautifully. But I read my work aloud a lot (when I give talks) so it is very hard to hear them read a different way. I can’t listen to them – sorry, Penny. It’s nothing personal.

7) Do you start with the ending first and then work back from there?

Never! I start from the beginning and follow where the characters and plot take me. The ending is as much a surprise to me as to anyone else.

8) When you write do you have the finished book in mind or does it grow of itself once pen encounters paper (or finger hits key)?

Yes, it grows. It always comes, and when it does I have a real physical reaction, like I’m hanging onto something…my spine tingles and I know it’s right. I live for those magic moments, which contrast to the daily edits and writing – and when I re-read my books I can tell when they happened.

9) Who are your favourite fictional criminals?

I’m rather fond of Dexter! I like my criminals smart; I also like the murderous gang in Donna Tartt’s Secret History. And the paedophile in Lolita is another great criminal character, Humbert Humbert.

10) How would you expect Humber Boy B to change if it were brought to the screen and if a writer other than yourself were to adapt it and make changes, how would you react to that?

I would be delighted to see it on TV and I would respect the screenwriters changes. It’s a different skill to novel writing, one I don’t have, and I believe in respecting editorial changes. I’m the same with changes to my novels – I always listen and try to improve. I’m not precious.

I think reading Rebecca by Daphne Du Maurier was the first time it clicked for me that crime writing included books like that – fine literature. This was important for me, because I’d studied English Lit at Warwick and the course was a bit stuffy and po-faced about what was `good` literature. I had to re-learn my own definition.

12) What if (in some crazy world) you were banned from writing the crime genre. Would you continue writing and, if so, what other genre/s do you think you would write?

Well, on a serious note for a mo, women who write have historically been seen as threatening and labelled hysterical and mentally ill…all that about the pen being mightier than the sword. Metaphorical penis and all that …I actually do write in other genres. I do light fiction for Woman’s Weekly (imagine!) and I’m also working on a dystopia right now. And my first novel, The James Version, is historical (based on the murder of Maria Marten in the Red Barn in the 1800s).