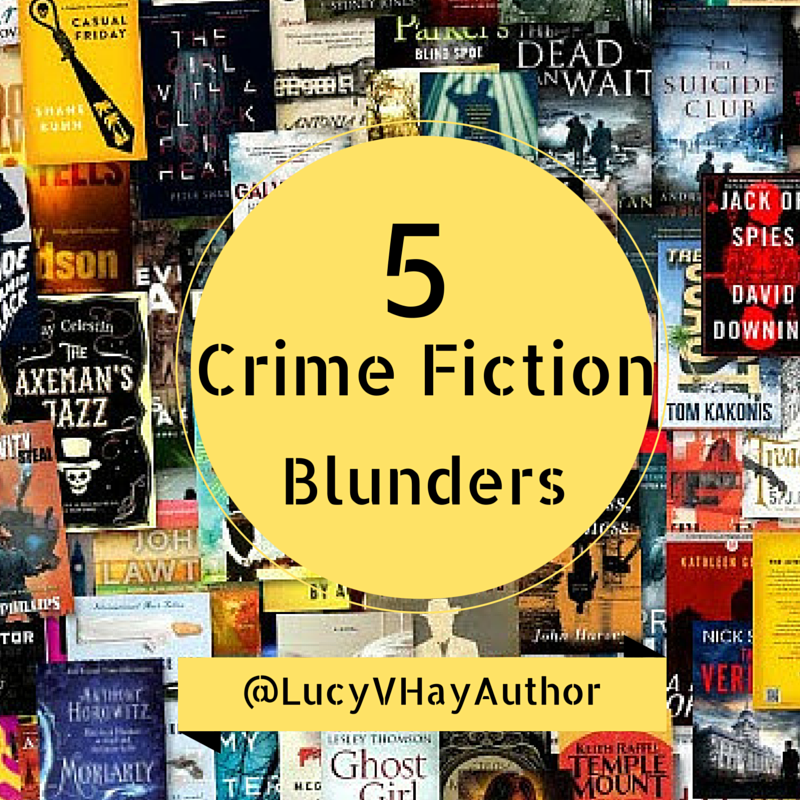 In addition to being an author, I am a big crime fiction, psychological thriller and mystery fan.

Though I have always read this genre, I’ve spent the last year absolutely immersing myself in it, reading and reviewing everything I can. In addition, I’ve been discussing the genre with lots of other fans as part of my ‘Best of 3’ blog feature and via my Criminally Good Bookclub on Facebook.

Combining this with my other job working with writers, I have identified five key blunders writers may make (including myself!) when attempting crime fiction. Enjoy!

1) Too Few Or Too Many Characters

An obvious one to start off with: too few characters? If you’re writing a mystery, then it’s going to be too easy to figure out Who Is Behind It All. But the answer is not too many characters either (as tempting as that might seem). Why? Because then the reader’s attention is spread too thin and we won’t be able to invest in the characters’ motivations.

Mistress of Crime Agatha Christie was a superb plotter, with most of her killers introduced within the first quarter of her books. This is a good tactic, because readers can feel cheated if you introduce the real antagonist much later.

However, you don’t want to be too noticeable when introducing the antagonist, either. The best antagonists have a strong motivation for their crimes, but this should be “hiding in plain sight”, not obvious.

This is the thing. If you’re writing a dark, sexy thriller then – guess what! – it should stay dark and sexy throughout. Equally, if you’re writing the kind of crime fiction that say, includes graphic violence, then you should stick with that.

If you suddenly include farcical or even dry humour in either of the above? It’s going to feel quite weird to the reader! Again, obvious stuff, but in my other job as a script editor, I see these kinds of sudden tone changes in novels and screenplays all the time.

In early drafts of crime fiction novels, I’ve noticed sometimes writers will introduce too many possible red herrings, or go overboard with one so it’s ‘obvious’ it can’t be that character because they’ve spent too much time on him or her.

Wikipedia defines a red herring as “something that misleads or distracts from a relevant or important issue …  A literary device that leads readers towards a false conclusion.”

Those last two words are the most important, for me. Thinking about what you want the reader to THINK INSTEAD can really help create a good red herring. In other words, it’s not about the *time* you spend with the red herring, but the question mark you place over his/her head!

Because crime fiction is plot-driven, a satisfying ending is absolutely paramount. If you rush the ending, then readers will feel ripped off. Equally, if all the revelations are “backended” to the resolution, then you’ll blow the readers’ minds and bamboozle them. This will lead to disatisfaction too!