Today it’s proof reader Elinor Perry-Smith’s turn to share her top 3 — and it would seem she’s a Patricia Highsmith ADDICT! Over to you, Elinor …

I love the labyrinthine plot, the way Ripley – just – manages to pull his appropriation of Dickie’s identity off; his house, clothes and even an allowance from his father. And the strange thing is, the reader is gradually seduced by him, so that we find ourselves rooting for him in a weird, voyeuristic way. Perhaps Ripley appeals to that part of a reader that seeks to rise above humble beginnings.

Like a strange metaphor for Tom Ripley’s origins, forged paintings lie at the heart of this story. Ripley’s ruthlessness and survival instincts kick in. He must create a suitably convincing story to erase the trail of lies and deceit that lead back to him. He even confesses the truth at one point but is obliged to kill the art collector who threatens to expose him. 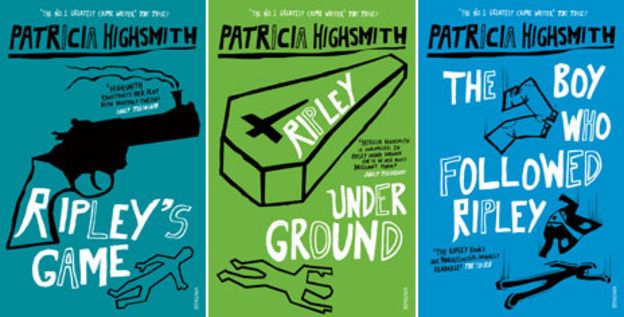 By now well established in the French countryside with his wife and housekeeper, surrounded by the riches that his criminal life has brought him, Ripley allows his annoyance at a neighbour’s slight to bring him to a curious sort of revenge. Trevanny has leukaemia, but is persuaded by Tom to become a hitman, earning astronomical sums.

As ever, nothing is simple in Ripley’s world. Trevanny succeeds, with Tom’s help and vengeful Mafiosi are sent to their town. Trevanny is shot and dies instead of Tom, but his widow accepts the blood-money, ensuring Tom’s safety. This novel hints more at the nature of Tom’s childhood and early emotional deprivation.

Highsmith’s forensic prose is utterly consistent. It’s like reading the thoughts of the psychopathic Ripley. He would be an unappealing antihero without the little hints at some sort of vestigial conscience. Tom seems moved by Trevanny’s death, thinking it a sacrifice in his favour. Tom hates killing, only doing it if absolutely necessary. He puts me in mind of the Linda Fiorentino character in ‘The Last Seduction’, who gets away with it even though she’s a Femme Fatale.

BIO: Elinor Perry-Smith is a writer and freelance proofreader, based in SE London. She is Associate Editor at SEEN magazine and a reader for The Impact and Twisted50 initiatives for Create50 .