1) The Wolf Road by Beth Lewis

WHY I LIKE IT: This can’t technically be shelved under Crime, but it does tell the story of a most heinous series of crimes perpetrated by Kreagar Hallet, the father figure to our main character Elka. It’s set some time after the Damn Stupid, a catastrophic event that sets America back to an age equivalent to the pioneering era of the early nineteenth century—and this is one of the reasons why I loved The Wolf Road so much. The sense of setting is entirely realistic, and Elka’s striking voice brings a singular individuality to the story that I haven’t experienced in a long time. A top class debut. 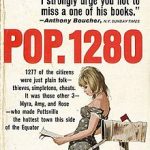 WHY I LIKE IT: If it’s one thing Thompson excels at, it’s creating main characters who are completely despicable and yet entirely compelling. Nick Corey is the worst Sheriff you’d ever want protecting your town and precisely because of this, he is an absolute treat to watch. He sleeps, eats and carouses his way through his duties until a number of problems begin to impact on his cushy station. And, boy, he doesn’t take kindly to that. Not one bit. Everything is liberally doused in 1950s Deep South Americana, which I love, and, to top it all off, Thompson’s economic prose is to die for. 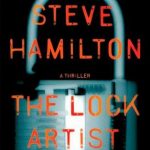 3) The Lock Artist by Steve Hamilton

WHY I LIKE IT: Not only is eighteen-year-old Mike an absolute whizz at opening things—a locked door without a key, a padlock with no combination, occasionally even an eight-hundred pound safe—Mike is also mute and has been since a childhood trauma. It’s this unique trait in its protagonist that sets this novel apart. Mike doesn’t say a single word throughout the entire story—not when the wrong people want to use him for his unique skills, not even when he falls in love and desperately wants to leave his enforced life of crime. He’s one of the most memorable characters in a crime book I’ve read and that’s why The Lock Artist is in my Best of 3.

BIO: G X Todd is a thirty-five-year-old librarian from the West Midlands. Since completing a history degree at the University of Birmingham, she has worked for public libraries for more than a decade and currently drives a 35ft long library van around the borough. Follow her as @gemtodd on Twitter and check out her website HERE.

Defender, GX’s first novel, is an imaginative thriller that draws on influences from Stephen King, Clive Barker and Neil Gaiman to create a new world – where the biggest threat mankind faces is from the voices inside your own head. Defender was one of my top 4 reads of 2016! Find out why, HERE.