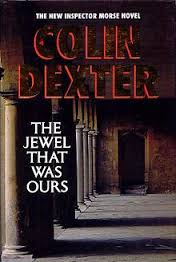 The Jewel That Was Ours by Colin Dexter

WHY I LIKE IT– Every book Colin Dexter has written is simply perfect. His Inspector Morse novels, which lent themselves so perfectly to television, are perfectly crafted works of art in their own right. The novels, which are more complicated than the television episodes, embrace you in the luxuries of Oxford life, before suddenly pulling the rug on that comfort.

The Jewel That Was Ours weaves a story that captivates from the beginning. As you join a group of American tourists at the Randolph Hotel, Dexter takes you firmly by the imagination, before leading his readers through every word, to a conclusion you don’t see coming.

Dexter, a master of crime writing, does not waste one single word in this novel. Every sentence is crafted to have a purpose. 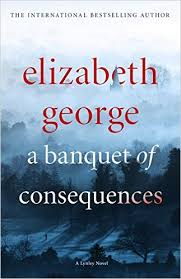 A Banquet of Consequences by Elizabeth George

WHY DO I LIKE IT? A Banquet of Consequences is a much needed return to form for Elizabeth George. The last three Inspector Lynley and Sergeant Havers novels have had the detectives’ private lives as the main focus, which didn’t work for me at all.

PS- if you have seen the Inspector Lynley television programmes, and they have (rightly) put you off the novels, then I urge you to give the books a try. They are superior in every single way. 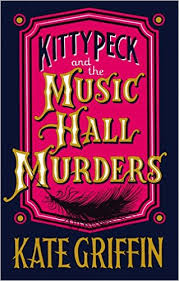 WHY DO I LIKE IT? I picked up a copy of Kitty Peck and the Musical Hall Murders in a last minute desperate need to have a book to read on an unexpected flight.

Within three paragraphs I was gripped. By the end of the first chapter I knew I was reading a Victorian mystery that I would have done anything to have written myself.

Kitty Peck is a young woman on the poverty line, working in a backstreet London musical hall in order to survive. Her life takes an unexpected turn when it is discovered she has a head for heights. Put in a massive bird cage every night, Kitty is hoisted high into the eaves of the musical hall to perform on a tiny trapeze. From her vantage point Kitty sees far more than the applause of the audience however… Soon her observations begin to cause trouble. And then girls start to go missing…

BIO: Jenny Kane is a bestselling freelance writer of romantic fiction and runs courses and workshops for writers as part of Devon Writers (get a free PDF list of writing competitions, HERE). Find Jenny on Facebook, HERE and follow her on Twitter as @JennyKaneAuthor.

1 thought on “BEST OF 3: @JennyKaneAuthor”