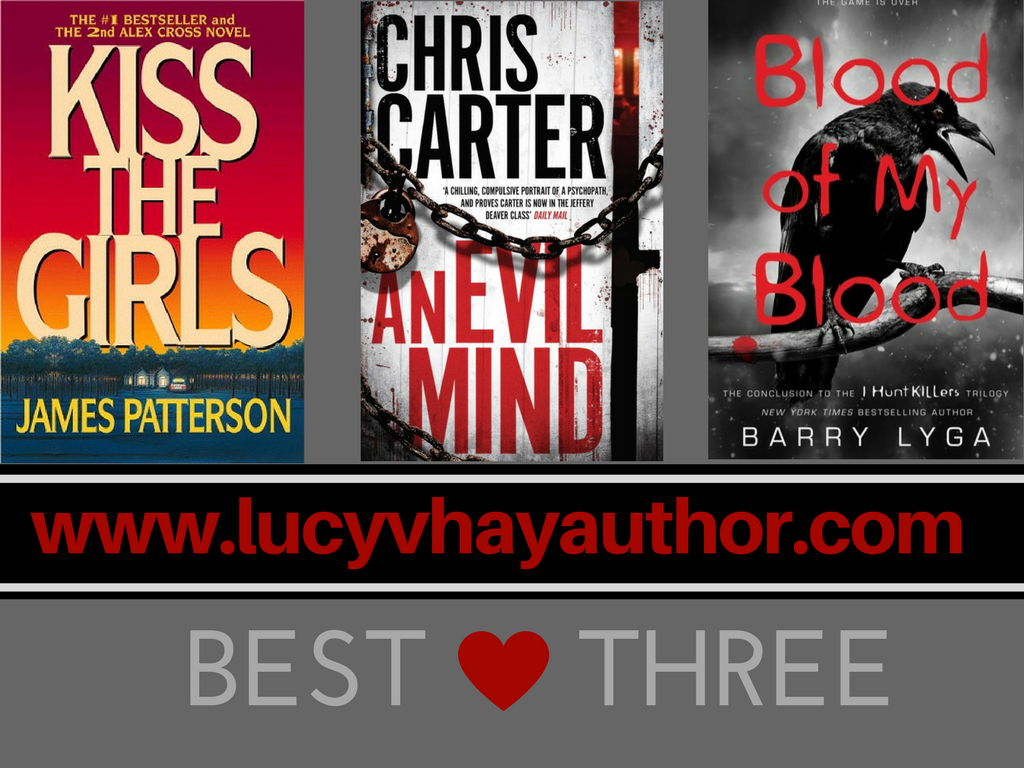 My best of three choices are all influenced by my love of the ‘serial killer’ novel!

1) Kiss The Girls by James Patterson

The first has to be Kiss The Girls by James Patterson.  It’s recently been re-released but I read it in the 1990’s and was hooked by Alex Cross as a detective but mainly by the detailed layering of the story.  The fact that two serial killers were playing a game, competing and challenging each other was gripping and the complex plotting was sophisticated.

2) An Evil Mind by Chris Carter

My second choice has to be An Evil Mind by Chris Carter is a true cat and mouse, the likes of which I had never read before.  The explosive opening is memorable and the mind games the killer employed are well researched and totally convincing.  I read this in one sitting…. I believe I didn’t take a single breath during that time, but, I did make sure the doors were locked.

3) Blood of My Blood by Barry Lyga

My final choice is a Young Adult crime fiction novel by Barry Lyga called Blood of My Blood.  What fascinates me about this book is that it revolves around the whole concept of Nature V Nurture and, without giving anything away, it turns the entire concept on its head.  A fantastic read that I never saw coming when I started it.

BIO: Liz Mistry is a crime fiction author with two books published by Bloodhound Books, Unquiet Souls and Uncoiled Lies, with the third   released later in the year. Liz also co-founded The Crime Warp Blog which covers al things crime fiction, from reviews to articles to author Q&A’s.  You can find Liz on Twitter: @LizCrimeWarp  and on Facebook: @LizMistrybooks.