For those who don’t know, my ‘day job’ is as a script editor for movies, so one reason I love crime fiction is because it is strongly plot-led (ie. without a crime, there is no story!). So here are 5 I think would make GREAT movies or TV – here’s hoping! 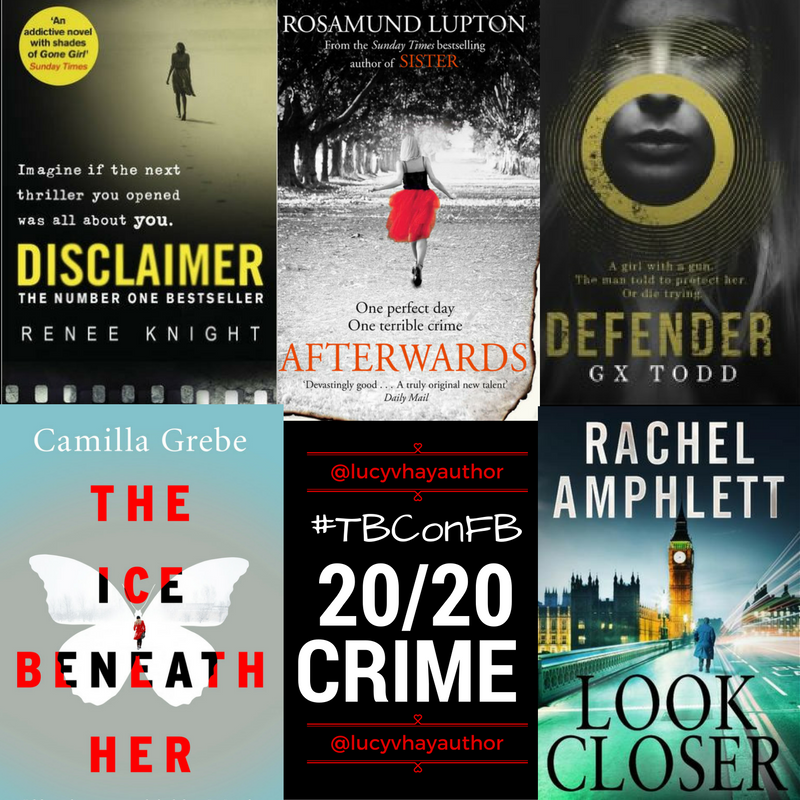 When Catherine finds a mysterious novel at her bedside plunges documentary filmmaker Catherine Ravenscroft into a living nightmare – because it recreates in vivid, unmistakable detail the terrible day Catherine became hostage to a dark secret, a secret that only one other person knew–and that person is dead. This in in my top 20 as I LOVED the concept here and could see it in vivid detail as a movie, probably one directed by the likes of David Fincher like the masterly GONE GIRL adaptation that got so many Oscar nominations. Amy Adams to play Catherine!

When there is a fire at a small private school on a summer sports day – and tragedy strikes as mother Grace races into the building to rescue her teenage daughter Jenny. Though she gets her out, she and Jenny become unconscious, thrust into a supernatural limbo-world. As ‘spirits’, yet not quite-dead, Grace and Jenny take it upon themselves to find the arsonist who set the fire, in the hope they can find their way back to their physical bodies. I adored the writing here and as someone who has had a near-death experience, the emotional truth here made me cry. Absolutely gorgeous storytelling and one that would make a fabulous mini-series for TV.

This book is set in a dystopian landscape in which most people have started to hear voices … Unable to cope, the world has been trashed and civilisation has fallen. We follow the fates of Pilgrim, a loner who meets a sixteen year old girl, Lacey who needs an escort to the city to see her sister. Visual and relentless, DEFENDER is an unstoppable force that could lend itself to the silver screen SO well – though they may have to tone down some of the violence for a ‘15’ certificate; at the moment it makes MAD MAX FURY ROAD look like Disney!

4) The Ice Beneath Her by Camilla Grebe (police procedural/ Nordic Noir/ crime).

When a young woman is found beheaded in an infamous business tycoon’s marble-lined hallway, who is missing without a trace, it seems obvious – he has killed her and gone on the run. This is in my Top 20 because I loved the plotting here, which was tight and visual. I could see this as a low budget, non-linear film, in the style of something like MEMENTO. Told from the POV of Emma, a lowly sales assistant in the tycoon’s empire, we’re left in doubt as to who is who – and doing WHAT. Everything is up for grabs, but until we discover the motivation behind that terrible murder, the truth is out of reach.

Will Fletcher seems to have it all – perfect job, perfect life. But then a bungled assassination attempt on a London street uncovers a disturbing conspiracy fuelled by organised crime and political ambition. Now, Will finds himself on the run, pursued by a dangerous enemy who will stop at nothing to protect his employer’s past. This is in my Top 20 because it really hits the ground running (pun intended) in terms of plotting, making us play ‘catch up’ all the way. I was reminded of movies like THE BOURNE IDENTITY and TV series like SPOOKS – I think it could be either if it was adapted. Clever storytelling with appealing characters really kept me on the edge of my seat. Recommended!

Which books have YOU read that you feel would make excellent movies and TV shows?