BOOK VERSUS FILM: Which Castle Is Captured Best? 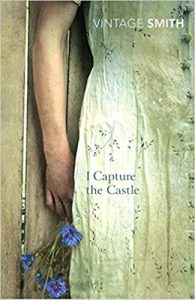 Somehow, this book had passed me by – I’d actually thought I’d read it for years, but turns out I had mixed it up with Shirley Jackson’s We Have Always Lived In The Castle! But I love British fiction set in rural England, in castles and with large (mad) families, so I Capture The Castle by Dodie Smith was a no-brainer! When someone offered it to me in a book swap, I had to read it, no question.

With fans so illustrious as JK Rowling, I knew the book had to be something special. The story of Cassandra, a young woman-girl’s first forays into love and heartbreak, there’s something so gloriously female about the angst here. When two Americans take up residence not far from the castle (becoming their landlords in the process), they quickly esconce themselves in the Mortmains’ lives. Simon proposes to Rose, Cassandra’s sister, only for everything to get out of control (especially considering Cassandra is in love with him herself).

Cassandra narrates the goings-on in her diary about her madcap family with aplomb; there’s some genuinely funny moments that border of tragedy, especially between her father Mortmain and his second wife, Topaz; or between Topaz and her sister, the recalcitrant Rose. In fact, Topaz is the high point of the book for me: I fell quickly in love with this seemingly hare-brained, yet wise-beyond-her-years exhibitionist. She was such a contradiction in terms and truly delightful.

That said, I love tight plotting, whilst I Capture The Castle is more of a character-led, ramshackle affair. Whilst it kicks off at a rip-roaring pace, with a neat and intriguing ending, I finished the book feeling it could have been shorter, with an extended period feeling like it was ‘treading water’ in the middle. The characters were indeed a blast, plus there’s a hefty wedge of emotional truth, but overall I felt as if I liked the book a great deal, rather than loved it. I am however glad I read it and finally realise it’s a separate story to Shirley Jackson’s (which, incidentally, I LOVE — but then it’s considerably darker, which hints at my preferences).

The film version of I Capture The Castle came out in 2003 by BBC Films and has an 80% fresh rating on Rotten Tomatoes, the online reviews aggregator. It features a very young Rose Byrne and a youngish Bill Nighy, including a host of other British and American stars whose faces you’d instantly recognise, even if you don’t know their names … Not least Henry ‘Superman’ Cavill!

Like the novel, the movie had passed me by as well, though I managed to pick the DVD up on Amazon for 99p. I settled down to watch it and was mildly surprised by how faithful it was to the original text, right down to beginning with Cassandra writing in the kitchen sink. In fact, the first half is transposed almost verbatim from the pages and straight onto film, somehow. Romola Garai does a great job in the role; she was Cassandra to me.

Mortmain, similarly, is perfect; though Topaz is much more angsty in the film version. Her ‘communing with nature’ appears to be a release from the house of madness, which I liked, but I grieved for the flighty, somewhat obvious Topaz I had envisaged in the book. I love the unintended dramatic irony that Henry Cavill has himself grown up to be ‘big in Hollywood’, so he was perfect for the role of Stephen. He plays him a bit wet and naive, rather than dark and brooding, which worked especially well for me.

The ‘Night of the Bear’, we see Stephen seeing Niall and Rose kiss, so it makes sense we also see him go to see Niall, in a bid to bring them together to ensure Cassandra has Simon for herself. This means it’s a little less ‘out of left field’ than in the book, but for me, it Cassandra’s agonising, entirely from her POV, is much more interesting. 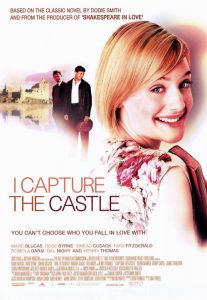 There are some additions to the telling of the story, the most striking being dream sequences of Cassandra’s about Simon; or flashbacks to when her father attacked her mother with the cake knife and went to prison. These felt rather jarring for me, as if they hadn’t ‘earned’ their place in the narrative. There’s also a subtlely different slant to the ending of the story, with Cassandra outwardly rejecting Simon, since she fears being second best like her own mother was. The book is much more ambiguous on this, which feels more true to life (though this is, arguably, not suitable for a movie which insists its characters must be more active).

But overall, this was surely good enough to satisfy the most ardent fan of the book, but for me, the movie felt rather flat. It feels rather theatrical, with a ‘lack’ of movement, which seems odd considering the castle and its surrounding lands is so visual. But Cassandra’s voiceover seems to take over, sucking the vitality from each scene. Which is a shame, because there are some great performances, not least between Cassandra and Mortmain. When she stands up to Mortmain in the tower, telling him that he has been indulged, this is a really powerful moment. Similarly, I loved the argument between Rose and Cassandra about Rose’s marriage means for the family, in taking them out of poverty. In short, there was loads good about it, it just failed to CAPTURE (arf) me.

This – for once! – is an easy one: it’s no question for me that the book is waaaaaay better. Interestingly, in my research for this blog post I have discovered die-hard fans of the book DON’T like the film at all. Whilst I don’t share their mad ardour for the book, I can see why: the movie is SO slavishly faithful, I can’t help but wonder if they’d been less so, it might have hit the right notes with them, more? But the critics liked it and so did 76% of the audience, so maybe the die-hards are small in number. Whatever the case, I have no hesitation in recommending the book, but only recommend the film to the curious who want to see how it fares in its adaptation. Enjoy!