BOOK VERSUS FILM: You Were Never Really Here

You Were Never Really Here is a novella by Jonathan Ames. It was originally approximately fifty pages, though it was extended to about 100 when the movie adaptation came out. I read the new version for the purposes of this comparison. Here’s the short synopsis of the book from Amazon:

Joe has witnessed things that cannot be erased. A former FBI agent and Marine, his abusive childhood has left him damaged beyond repair. So he hides away, earning a living rescuing girls who have been kidnapped into the sex trade.

Now he’s been hired to save the daughter of a New York senator, held captive at a Manhattan brothel. But he’s stumbled into a dangerous web of conspiracy and he s about to pay the price.

Brutal and redemptive in equal measure, You Were Never Really Here is a toxic shot of a thriller, laced with corruption, revenge and the darkest of inner demons.

I loved this book, I powered through it in about an hour. I adore thrillers and am fond of hitman stories anyway, but I haven’t seen a hitman quite like Joe. Very often hitmen are angsty or traumatised, but this is usually because of their service in the forces. 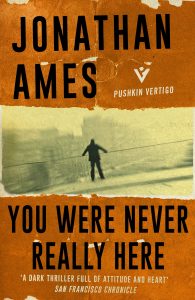 In comparison then, Joe went into a life of brutal killing because he was ALREADY traumatised. It’s the only thing he has ever known. Joe is a protagonist is not only ‘not entirely sane’, but he is aware of it too and it’s this insight that connected with me the most. After all, what would you do if the rules of society don’t apply to you, plus you don’t even care what happens to you?

It’s a compelling starting point for a character, especially when it’s obvious Joe does care about other people. He stays alive for his mother, plus he ensures he leads a life of solitude, so he does not hurt others … Either by accident because others are trying to hurt him, or because he may not be able to control himself. As the Amazon listing also says, ‘A hammer was Joe’s favourite weapon. He was his father’s son, after all.’

Joe is a dark and complex character, which mirrors the book’s plot. For such a short piece, I have seen less complex plotting in a novel three times its size. In this story world, sex and violence are currency in a world where men always get what they want. Through antagonist Votto we are asked to consider there are men in the world who will sacrifice anything – their children’s innocence, their wife’s life – for their ambitions. It makes for uncomfortable reading, because we know full well Votto’s actions have played out in the course of real life in some cases.

The book ends abruptly with Joe’s revenge on Votto, the man behind his mother’s murder. This might feel like a cheat to some, but invited to me to imagine what Joe could do next … Which, to all intents and purposes, could be anything. Would he go after Lisa, the girl who had been stolen, or not? Or does Joe just want to destroy them all?

We can’t be sure, the story is over … And that’s the point. We can’t be sure of anything Joe might do. He had been waiting for his mother to die, but now she is murdered, her death has given him renewed purpose.He is an unstable enigma. All we can be sure of is that people will pay. 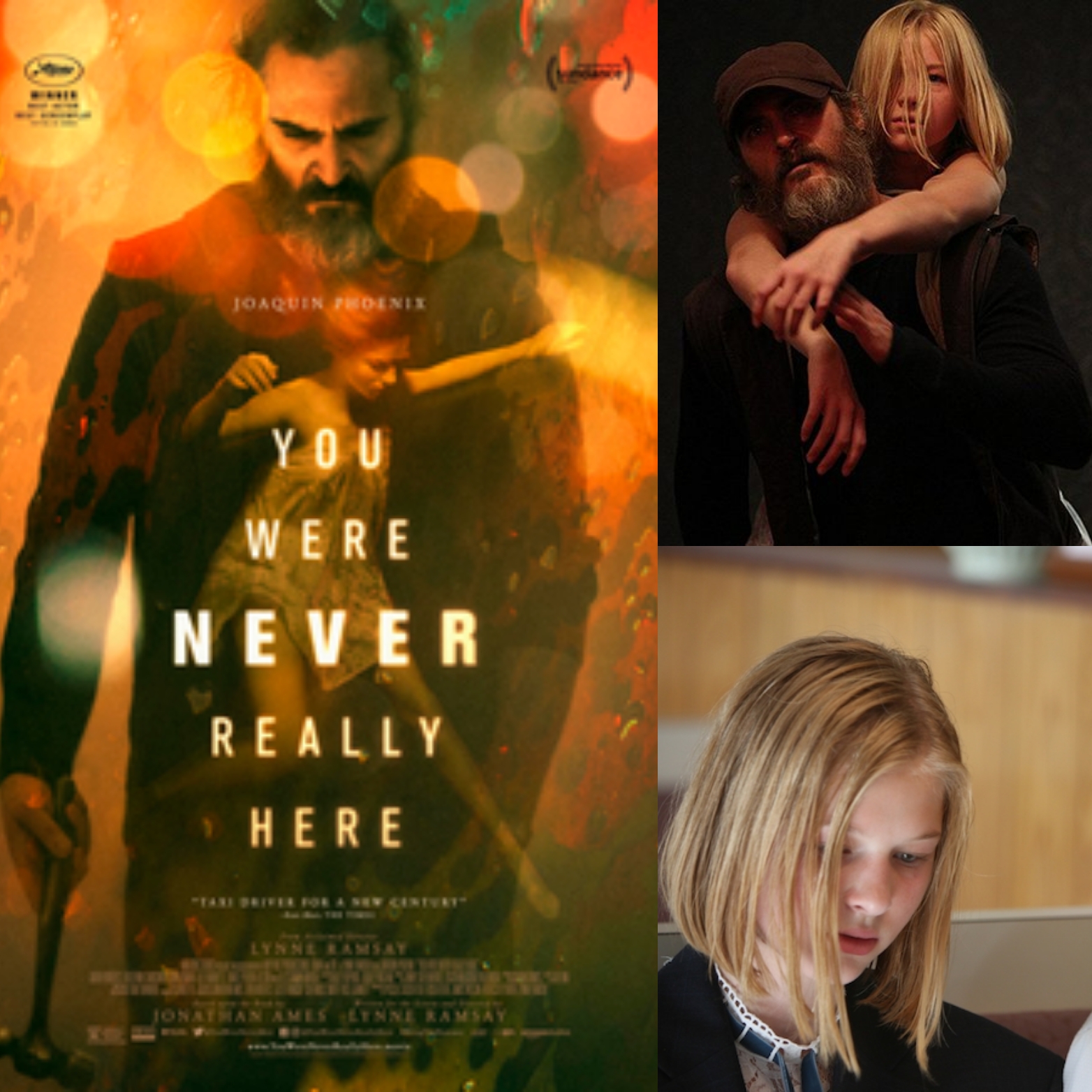 The film is listed on Amazon as Prime as ‘A tormented but brutal hired gun sets out to rescue a young girl from a sex ring, only to find himself weathering a storm of violent vengeance when matters go awry.’ It’s clear from the marketing materials too that the girl Joe rescues is much more central to the movie than she was in the book. This makes sense, because we have seen many movies about hitmen rescuing innocents, especially children: Man on Fire, Drive and Safe being just a few. It is ‘pre-sold’ and audiences have shown they like this story.

The first third of the movie is almost identical to the book, more or less. The filmmakers explore Joe’s state of mind as a series of intercuts, showing his suicidal thoughts and the causes of them (his past abuse). They also show his connection to his mother and how he looks after her, whilst simultaneously thinking constantly about his own self-destruction.

Joe is otherwise alone. Even though he has friends, he doesn’t recognise it. There’s a poignant moment when his handler McCreary talks about them both going out on his boat, having steaks and beer. Joe does not connect with him at all, saying only ‘What?‘ Joe can’t imagine why anyone would be interested in him, so he is in his own little world. He is out of reach. 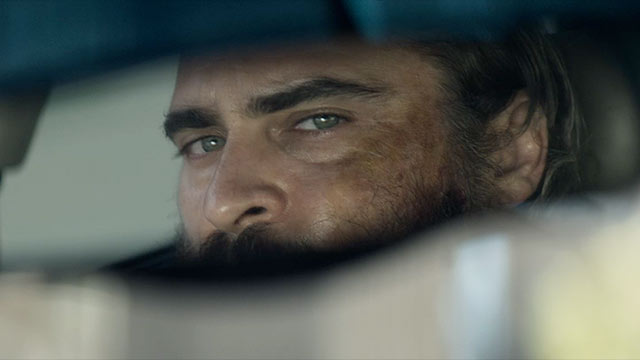 Lisa is re-named Nina in the film. There are two powerful recollections of Joe’s past as an FBI man and a soldier: the dead girls in the meat truck (present in the books); and a child in a foreign land, shot by bullies when Joe gave him a candy bar. This reminds us Joe thinks he is the problem – he believes he has caused these deaths.

So when his mother is killed – not to mention McCreary, his informant at the bodega and his son too – we can see why Joe would unravel so spectacularly in the book. He has been waiting his whole life for this. In comparison, Joe is no vengeful hero in the movie. First he gives his mother a water burial, like he does in the book. But instead of driving off in search of Votto like the novella, he fills his pockets with stones and attempts to join her. As he begins to sink, his mother’s blonde hair reminds him of Nina. It’s this that prompts him to clamber from the lake and go in search of her.

There are other small tweaks to the plot, but ones have far-reaching consequences. Nina’s father Votto kills himself early on the movie (though we suspect he may have been thrown from the roof-top). Governor Williams replaces him as the antagonist, a composite character of the Mafia Boss who strong-armed Votto to hand over his daughter to the brothels in the book. (The filmmakers hint that Votto handed Nina over here too. A shot shows the two men lying in Nina’s room, on her bed, together whilst the semi-naked Nina looks on – a clever play on the old adage, ‘getting into bed together’). 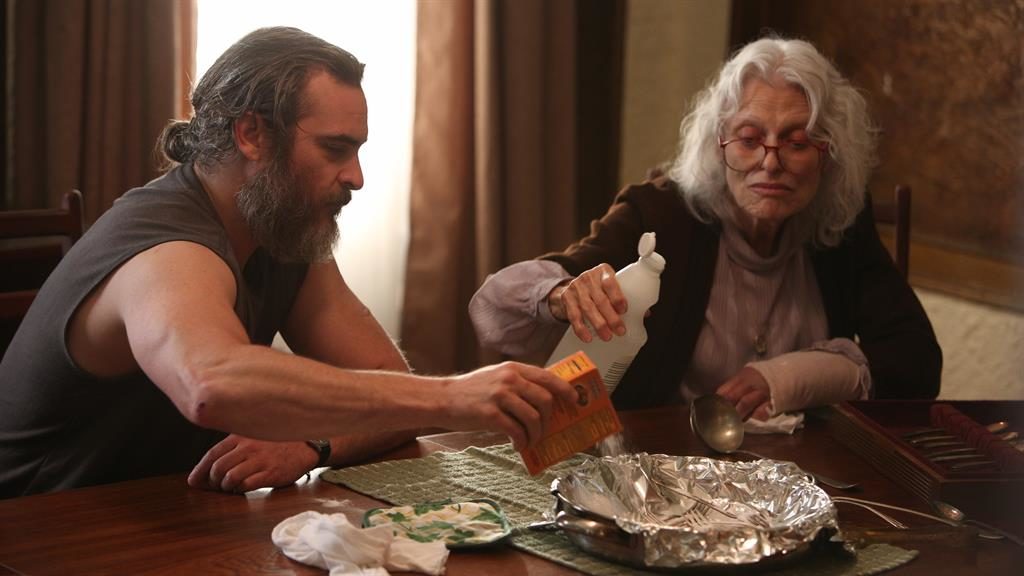 The ‘open’ ending is gone too, replaced with Joe attempting to do what I hoped he would … He tries to rescue Nina (re-named from Lisa, in the book) from Governor Williams. But this is not a story of heroes, so it is a great decision of the filmmakers to have him arrive too late. He is distraught: he cannot avenge his mother, he is not a good son. Now he has nothing.

But then something unexpected happens. As Joe walks listlessly through Williams’ grand house, he finds Nina, covered in blood, eating dinner by herself. The little girl, sick of being Williams’ play thing, has killed him herself.

That’s what I like best about the movie: Nina and Joe are doppelgängers. They are both traumatised and capable of terrible violence (however justified) because of it. Unlike Joe though, Nina is not completely hollowed-out by this terrible life yet. That’s why, at the diner, she tells him ‘It’s a beautiful day’. She is symbolic of hope and a new beginning. Now Joe can either kill himself, or take responsibility for her like he took responsibility for his mother. Though he still thinks about suicide (responsibility or even love are not magic cure-alls!), his life nevertheless has purpose again. They leave together.

Another tough one, because I like both so much. That said, Joe in the movie is much more relatable to me. We know for definite he is the protector of a child, which makes me warm to the movie version more. I also like his change of heart in the lake more too, which doesn’t happen in the book. But most of all it’s the clever doppelgänger element that swings it for me. So there might only be a hair between it, but it has to be the film this time!

3 thoughts on “BOOK VERSUS FILM: You Were Never Really Here”