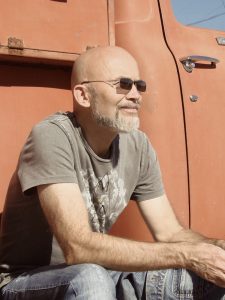 I’m a Canadian author living in Vancouver, and I’m getting set for the launch of my fifth novel, Zero Avenue, during the first week of October. My first three books are crime stories set on the West Coast, and the fourth, House of Blazes, is historical fiction set in San Francisco in 1906 at the time of the great earthquake and fire.

Zero Avenue takes place during the early days of Vancouver’s punk music scene. The story follows Frankie del Rey, who aspires to launch her music career and raise enough money to cut a demo record and take her band Waves of Nausea on the road. To make ends meet she mules drugs for a powerful dealer named Marty Sayles. Things are going well when she gets in a relationship with Johnny Falco, owner of a struggling club on the Downtown Eastside.

I am also the award-winning author of Ride the Lightning, The Deadbeat Club, Triggerfish, House of Blazes. Nearly fifty of my short stories have been published internationally. You can find me online via my blog, HERE.

Growing up, I was inspired by reading the greats, guys like Elmore Leonard, George V. Higgins, James Crumley, and Charles Willeford. When I started out I wrote mainly short stories, experimenting with different genres and styles, trying to find my own voice. And I guess I ended up writing the kind of novels that I always liked to read, and crime fiction just seems to fit.

I like to tell a story from the characters’ perspectives, trying not to interfere by imposing my own values or principles in the narrative — letting them tell their own story. Often the characters end up in that gray area between not all good and not all bad. To me, that makes them less predictable and more interesting since they don’t follow any rules, or they bend them to get what they want, or catch who they’re after. I don’t plot my stories beforehand, so when I start writing opening chapters I have no real idea where the story will end up, but I enjoy seeing where the whole thing will lead.

I also like tossing some levity against the tension of a crime story; it creates an interesting balance. While there’s nothing funny in the crimes themselves, sometimes it’s the characters’ own cleverness or the lack of it, and sometimes it’s their own desperation, which lead to moments of dark humor. 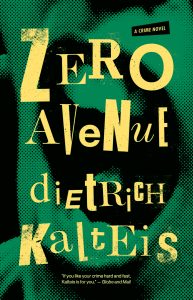 I often read something in the news, or I’ll listen to somebody telling me about something that happened. If I find it interesting, in my mind I start thinking, well what if this happens, and the next thing I’m spinning it into a story. That’s how my novels usually start out, with a single scene. I don’t plot out my stories beforehand, so the stories just grow from these single scenes. As I’m writing, I’m also researching and finding more that I can weave into the story.

In my historical novel, House of Blazes, I set the story along the Barbary Coast at the time of the 1906 San Francisco earthquake. What drew me to it for the story’s setting was its lawless history, and I also liked how the story took on this western-meets-modern-city feel. While I was working on the story, I came across an article about a modern-day couple who found a fortune in gold coins on a property they owned not far from San Francisco. The coins originated from the San Francisco mint around the turn of the last century. Experts and historians couldn’t agree how they got there, but it gave me a new twist to build into my story.

Itʼs very simple: walk dog, eat, write. Repeat. Along with some coffee, I play music that suits whatever I’m working on, and I write from very early morning until noon everyday. Sometimes I come back to it later in the day, but morning is the best time since I’m sharper then. Keeping to the same routine allows me to stay focused and jump straight in every morning and get right to work.

I read a novel every week, sometimes more, so I could come up with a long list of great ones. While I can’t say that I wish that I’d written any of them, a great novel inspires me to write my own stories; and if anything, I wish I had extra time to read more.

For me, it’s about an author’s voice — it’s the personality of the writing, it’s what makes each author unique. It’s the way they combine syntax, pace, character dialog, and all the story elements and just pull the whole thing off. It’s like magic when I read a story that’s hard to put down. And when I finish, I just want to rush out and find everything else that author’s ever written.

It doesn’t happen with every book I read, but there are a couple that I recently read that are that good: Razor Girl by Carl Hiassen, and The Force by Don Winslow. Then there are a few classics I reread that also had that effect the second time around: The Last Good Kiss by James Crumley, Miami Blues by Charles Willeford and Trouble in Paradise by Robert B. Parker.