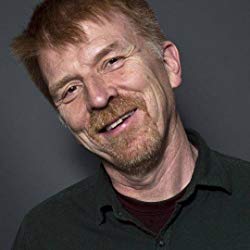 I’m Gordon Brown, not the ex-Prime Minister, and I’ve written six novels so far. Falling and Falling Too (the Charlie Wiggs series), Darkest Thoughts, Furthest Reaches and Deepest Wounds (the Craig McIntyre series) and a stand-alone called 59 Minutes. I’ve also written a number of published short stories in the following anthologies – Bloody Scotland, Blood on the Bayou and the CWA’s Mystery Tour.

In a former life I was the Brand Director at Tennent’s, the marketing director at STV, delivered pizzas in Toronto, sold non-alcoholic beer in the Middle East, launched a creativity training business and floated a high-tech company on the London Stock Exchange. I’ve compered the main stage at a two-day music festival and was once booed by 49,000 people while on the pitch at a major football Cup Final. I’m a local radio DJ and I’m one of the founding directors of Bloody Scotland, Scotland’s International Crime Writing festival.

There’s more about me at www.gordonjbrown.com or you can tweet me @GoJaBrown.

I have two on-going series (and a third in the offing). The Craig McIntyre novels are U.S. based conspiracy thrillers and the Charlie Wiggs books are Scottish crime but, at the root of all my writing is a simple idea – how do ordinary people cope with the extraordinary. Crime/thrillers are an ideal genre for me to work within. I started out, when I first put pen to paper, with a penchant for horror and sc -fi and this still shows in some of my work. The Craig McIntyre series has been called high concept. I like to build the plot around the characters and I find that the stories flow so much better when I’m challenging those characters as hard as I can. For this reason, I write about the world of crime as it gives me wonderful license to put my characters through the mill. 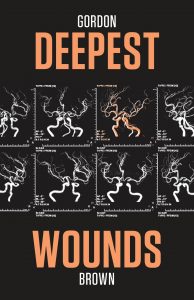 My preference, in writing a book, is to start with a single line and see where it takes me. My freshest work comes from wandering down blind alleys and figuring a way back out. I’ve been in Marketing for thirty-five years (it’s my day job) and the discipline is all about understanding your audience. I’ve spent an extraordinary amount of time trying to get under the skin of people. When it comes to writing a book that’s where I start, with the people. Get this right and everything else springs from there.

I also dig into my past a lot. For example, my father was a policeman in the sixties and seventies and, in the back of my head, I’m still a policeman’s son. That time in my life still provides me with inspiration and I’m now writing a novel (a new third series) that uses those experiences as the back story for my protagonist.

It used to revolve around planes, trains and hotels. My day job was full on and I had to grab anytime I could to write. All I’ve ever required is a laptop, a place to sit and my headphones. I need to have music on, to work. (At the moment I’m listening to a compilation called Cream Future Trance). The music cuts out the world beyond and lets me focus on my writing. But things are changing. Now that I’m spending more time writing and less time on the day job, I’ve gravitated to the dining table in my front room or the balcony in our apartment in Spain as my preferred places to write. I like early mornings. I’m not good with late nights. I also need a word count target to deliver my work. A minimum of 2,000 words per day – although I can double or triple that when I’m on a roll. I hate days when I’ve written nothing. Some nights I’ll go to bed, only to realise that I’ve not typed anything that day. I’ll often get back up, open my laptop and type ten words, then return to bed. That may sound pointless, but, in my head, every word is one closer to completing the next novel.

Such a tough question. If I have to choose one, I’d probably pick William McILvanney’s ‘Laidlaw’. He’s the godfather of Tartan Noir and that would have been a nice thing to put on my CV but, more importantly, Willie’s turn of phrase and use of our language is exquisite. Every sentence feels crafted to the point of perfection. Jack Laidlaw is the main protagonist in the book but the other star is Glasgow itself and the book is a magical balance of character and place. I had the joy of interviewing and meeting the great man a few times. A humbler person it would be hard to imagine. I once asked him why Laidlaw lived in Simshill (the very area in Glasgow where I grew up). Willie said he’d heard that’s where all the police lived in the sixties. My dad was a police constable and what Willie had heard was true; every second house around us had a police officer living in it. I told him that one night, over a drink, and he had smiled, telling me that was good to know because he’d never actually been to the place. A wonderful man. A wonderful