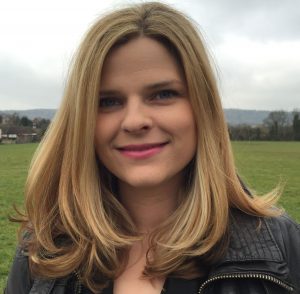 I’m Holly Seddon and I’m about to publish my second suspense novel, Don’t Close Your Eyes.

My first novel Try Not to Breathe was published in 2016 and – although it sets off my British anti-bragging alarm to say this – it became a bestseller. Which was amazing!

Although I wouldn’t call myself a pure crime writer, I am drawn to looking at why people do dark and dangerous things. Why would a person who – to anyone watching – has a comfortable and happy life, take risks, make bad decisions, hurt people… or worse?

I love to get under the skin of a character and see to what extremes I can take them.

With Try Not to Breathe, the original idea came from listening to a radio programme about people in what was then called “persistent vegetative state”. I imagined a teenager – Amy – falling into such a state at 15, and being largely forgotten as she grew older but, in many ways, remained stuck at 15. The crime that put her there and the subsequent press interest and police investigation were partly drawn from real life examples. 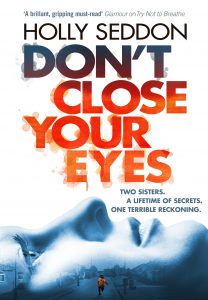 As an ex-journalist myself, the character of Alex Dale – the writer who picks up Amy’s case years later – was definitely informed by my own experiences.

In Don’t Close Your Eyes, the crimes committed are – without giving anything away – more subtle. I drew on anecdotes and cases of family dynamics sending shockwaves through the family tree for generations to come.

Ha! It’s more like a patchwork of chaos than a routine. I hustle as many kids out to school and daycare as possible, and then spend a bit of time faffing about before I read through what I wrote the day before, and then settle in and write around 1,000 to 2,000 words. Sometimes I don’t have childcare for my toddler, and he’s not the kind of helpfully pliant kid who’ll play with his toys quietly while I write, so I cram in as much writing as I can when my little wild man has his afternoon nap.

Right now I’ve just sent the publisher my latest manuscript for book three based on suggestions and questions from my editor. So for the next few weeks, my routine will be plotting and planning book 4. It has quite an unusual structure, which has to be very precise, so I’ll be outlining in a lot of detail. And I’m also going to be doing quite a bit of research before I actually start to write. I’m at the stage where it’s all potential so I think it’s the best thing ever and I’m desperate to get going. Check in on me in a couple of months and I’ll be a little less buoyant!

And Then There Were None by Agatha Christie. I found it hard to get used to the flood of exclamation marks but once I did, it was a masterclass in plot and planning. I also loved Appletree Yard by Louise Doughty and found Missing, Presumed by Susie Steiner such a refreshing police procedural.