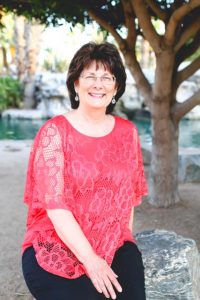 My name is Karen Randau. I currently have two books published in my Rim Country Mystery series, a third is nearly finished. They are published through Short On Time Books.

The first book in the series, Deadly Deceit, is set in a fictional mountain town in Arizona called Rim Vista. In it, the protagonist (Rita) is sitting beside her husband in their small-town movie theater when a man shoots Rita’s husband and thirteen other people. Ensnarled in a cover-up that puts her in an assassin’s crosshairs, Rita must unravel a web of lies and connections that date back to her husband’s service in the Iraq war – before a mysterious kidnapper returns Rita’s daughter Zoe one body part at a time. This fast-paced mystery/thriller is one you won’t want to put down from beginning to end. 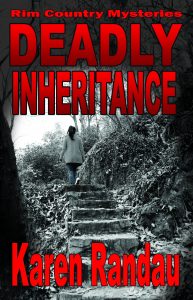 The second book, Deadly Inheritance, is set in Scotland, when Rita is on her honeymoon with the detective who investigated her husband’s murder. It features a poisoned hotel clerk, a ruined Scotland honeymoon, and a hidden Viking burial site. In this fast-paced mystery/thriller, Detective Cliff Avery plans to meet his grandfather for the first time while on his honeymoon with Rita. As the newlyweds check into the honeymoon suite at a luxurious Scottish hotel, the reception clerk dies after opening a note meant for Cliff. The action shifts into high gear when a mysterious woman uses the hotel clerk’s car against Rita and Cliff.

The couple team up a local detective to discover who wants them dead and why. The search for answers takes them on a one-of-a-kind tour of Scotland. The third book, Deadly Choices, takes Rita and Cliff back to small-town Arizona, where Rita’s mother comes for a visit and wants to go camping. Their plans change – and the action takes off – when an elderly woman stumbles into their campsite when the shaft of a bloody arrow protruding from her chest. Deadly Choices will be out later this year.

I write what I like to read. I especially like the fast pace of thrillers, and I enjoy creating intricate plots with twists that keep you guessing to the end. 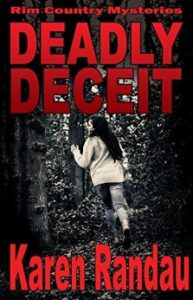 The idea for Deadly Deceit came from news headlines. The story isn’t true-life, but when I listened to news about a similar shooting, I wondered about the people left behind. That’s the story I told. I used a few of my own life experience throughout the novel, along with knowledge I’ve gained from working in an international organisation.

The idea for Deadly Inheritance came to me as I was thinking about places I’d like to visit. I thoroughly enjoyed the research about Scotland! Deadly Choices leapt from a scene in Deadly Inheritances, when Rita was thinking about the mother she hadn’t seen in a long time. It turns out Rita’s mother also had a devastating secret she’s hidden from Rita for a couple of decades.

I try to write every day, even if I can only manage a few hundred words. Sometimes, that’s just to clean up and improve the chapter I wrote the previous day! When I start a novel, I use a spreadsheet to create a preliminary outline. I like to use a spreadsheet because of the ease of counting the number of words in each chapter, anticipating where I should put twists, and keeping track of clues, red herrings, and ending hooks. It works better for me than anything else I’ve tried.

I typically use up the ideas in my outline fairly early in the writing. From that point on, I outline from one major turning point to the next (there are usually five).

I wish I’d written the Jack Reacher novels by Lee Child. I like how the author is able to take the protagonist to different places for each story. I also like how mysterious and accomplished Jack Reacher is.