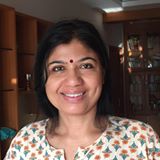 I am Sharmishtha Shenoy, an author in the murder mystery genre. I love to read. My favorite authors are Ruskin Bond, Satyajit Ray, Agatha Christie, JK Rowling, PG Wodehouse. I was born and brought up in Kolkata, the city of Joy , India. I studied in University of Reading, UK. I am married with a child. I live in Hyderabad and am very fond of travelling.

I have written two murder mystery books, both having Vikram Rana , an ex-cop and now a private investigator as a protagonist. The first book is Vikram Rana Investigates and the second book is A Season for Dying. My website can be found HERE, plus you can follow me on Twitter as @shenoy_sharmi. You can also LIKE my Facebook page, HERE.

I get inspired by real life unsolved cases. I collect crime related news in newspapers and television and if some story touches me, my imagination gets fired, in the sense what might have happened and accordingly I write my story. 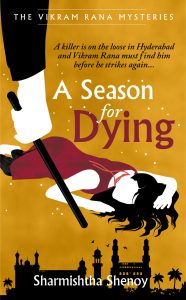 For example in A Season for Dying, I found inspiration of these stories of from two random killers:

The first was Dennis Lynn Rader (born March 9, 1945). He is an American serial killer who murdered ten people in Sedgwick County, Kansas, between 1974 and 1991. He is the infamous BTK random killer in the USA who called himself Bill Thomas Killman (BTK). He was also known as the BTK Strangler. “BTK” stands for “Bind, Torture, Kill”, which was his infamous signature. He sent letters describing the details of the killings to police and local news outlets when the murders happened.

The second one was Charles Cullen (born born February 22, 1960). He is a former nurse who is the most prolific serial killer in New Jersey. He confessed to authorities that he had killed up to 40 patients during his 16-year nursing career. Cullen stated that he gave patients overdoses so that he could end their suffering. However, many of his victims were not terminal and were about to be released from the hospital shortly when they died suddenly while under his care.

Cullen preyed on some of the most helpless, sick and trusting patients whose families believed they were safe and would be nursed with care and compassion. Little did they know that their loved ones were in grave danger at the hands of Nurse Cullen. The unsociable hours and inability for patients to communicate meant that Cullen could murder easily. There was no one to watch him and he had effortless access to his weapon of choice — prescription drugs.

I do not have a routine as such. I have to take care of my family, who do not take my writing profession very seriously. So whenever I get time between my household work, I write.

I wish I had written Gone Girl. The way Gillian Flynn misleads the reader in every step is just amazing. I wish I could be as devious (in the most flattering sense!). Another of my favourite books is The Devotion of Suspect X by Keigo Higashino.