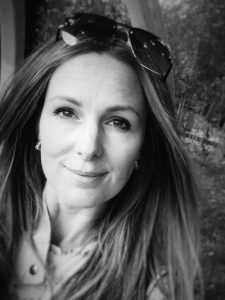 My name is Sharn Hutton and I released my first novel, It’s Killing Jerry at the end of last year. It the story of an everyday guy called Jeremy Adler, who, through a combination of misfortune, selfishness and cruel fate, finds that a surprising number of people would prefer it if he was dead.

The story opens with a news report of his disappearance then jumps back four months to watch the mayhem unfold.

It’s the first book in a series (outlines for two more currently – just got to get that writing done!). You can LIKE my page on Facebook; follow me on instagram as @sharnious and on Twitter as @sharnhutton1. Here I am on GOODREADS.

It’s Killing Jerry is quite unusual in the crime fiction world because the reader knows a lot more about what has happened than the detective investigating. It’s very much a character led story. As my first book, the plot unfolded before me – it was the tale waiting to be told. 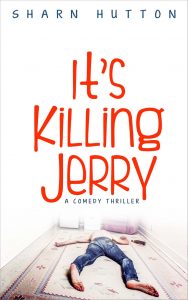 3)    What informs your crime writing?

Like most writers, I drew my themes from the world around me as I wanted it to be a story that most people could relate to. Jerry’s at the centre of a demanding world. He has a manipulative and selfish ex-wife, a narcissistic boss who wants him to lose his job, a needy best friend who’s out of work and too interested in Jerry’s life and a wife and new baby who cry together through the night. The demands upon him are huge and try as he might to keep everyone happy the tide of resentment is turning against him.

Themes running beneath the story include:

·         What is our definition of success? For many this means more money, a better job, but what about happiness, family and love?

·         How can women balance cultural and religious expectations against the realities of modern life?

·         The mixed blessing of parenthood. A new baby doesn’t bring joy for everyone!

I have young children so I have to fit writing around them. After the school run I get the dog marched around the park and domestic drudgery out of the way first and then aim to be at my desk by 11 AM. That gives me four clear hours until I have to fetch the ankle-biters again.

As a self-published author I’m spreading the word about It’s Killing Jerry myself so have to dedicate a fair bit of time to advertising and social media. Now that the sequel is underway so I’ll have to be strict about dividing my time between promo and writing.

I like my crime stories to have a whiff of irreverence and humour along with all the excitement and for that reason I’ll single out the Stephanie Plum series from Janet Evanovich. Those stories are so packed with character, danger and sex appeal, there’s been enough juice for novel after novel. 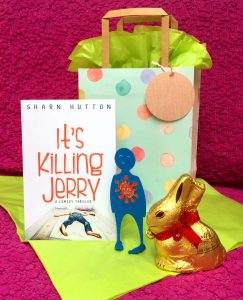 Sharn has very kindly put these great goodies up for grabs to Criminally Good readers. Want ’em? Then CLICK HERE (or on the pic on the left) and follow the instructions for your chance to win.

Please note: UK entries only, plus the deadline for the giveaway is 5pm GMT Easter Monday (April 17th, 2017).