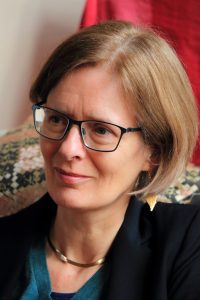 My name is Su Bristow, and my debut novel, Sealskin, has just been released by Orenda Books. It’s a retelling of the Scottish legend of the selkies, or seals who can turn into human beings, and what happens when a young fisherman witnesses this. It’s not a crime novel in the usual sense, although a crime is certainly committed that has very far-reaching consequences!

I’ve also written two books on herbal medicine – I am a consultant medical herbalist by profession – and one on relationship skills, co-written with psychotherapist Malcolm Stern. Check out my website HERE and follow me on  Twitter as @SuBristow.

2) Why do you write fiction?

Actually, I was writing fiction and making up stories long before I started writing non-fiction. One of my special studies at university was ethnomedicine, and it showed me that what people do to heal themselves when they have only the natural resources around them, is to make up stories. We all do it all the time, even when we think we’re making sense of the world. In fact, the more interesting question might be ‘why do some people think that they don’t make things up?’ 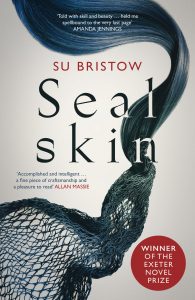 I’m particularly interested in the stories we’ve made up along the way about the natural and the supernatural worlds that under and overlie our own. They have a lot to tell us about ourselves and our preoccupations. All the ‘big’ stories, the legends that keep on being told and retold, tackle some of the major human questions: about life and death, right and wrong, love and conflict. And by clothing these big questions in metaphors, they add a layer of meaning that’s not purely fanciful. It speaks to our sense of wonder, our spirituality if you like.

Routine?? If only! Writing has to fit around other things, especially the demands of my herbal practice. It happens when I have time. But I do belong to a couple of writing groups, and it’s helpful to know that there are people expecting to see some words.

It’s very difficult to choose! And it’s not quite the same as books you really like, because part of the joy in those is that sense of touching minds with someone else, someone who takes you further than you would have been able to go on your own. Books like that might include The Lacuna by Barbara Kingsolver, or All The Light We Cannot See by Anthony Doerr.

That said, I think the book I think I’d most like to have written would be the Earthsea trilogy by Ursula le Guin. I love the style of her writing, the internal coherence of the world of Earthsea, the philosophy that underpins it, the stories themselves, the characters … Need I go on?

If I had to choose a crime writer whose writing I’d like to emulate, I think it would be PD James. For me, character development is at least as important as plot, and she does this very well indeed, even with quite minor characters. And there’s a powerful melancholy in all of her novels, a sense of the terrible havoc that crimes wreak in people’s lives, that makes them feel more real than a lot of other crime novels I’ve read.