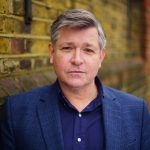 I’m Terence Bailey, and my paranormal thriller, Dead in Time, has just been published by Accent Press. It features Dr Sara Jones, a psychiatrist and expert on the occult. After a failed love affair, Sara flees London for her remote home town, only to get caught up in the investigation of a killer who thinks he’s psychic.

Ultimately, Sara is forced to choose between loyalty to the case, or finally understanding the events of her childhood, which have haunted her for her entire life. The book is the first in a series called The Sara Jones Cycle. You can find my Facebook author page, HERE.

Crime fiction puts its characters under huge stress, and it’s in those crushing moments that comfortable beliefs get challenged. There’s a wonderful dissonance between the everyday comfort characters usually live in, and this terrible thing they now have to deal with. Often it leads them to commit acts they never thought they would. This means that crime writers get to explore some really big themes. In my case, they’re issues of knowledge and ignorance, complicity and innocence, and the breakdown of traditional morality. Such massive dichotomies offer crime writers the chance to give readers an exciting story, too. 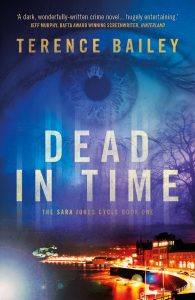 In Dead in Time, Sara Jones is an academic expert on the occult. She knows a lot about it, but believes none of it. Then she’s forced to confront someone who may actually be psychic. Her struggle between disbelief and belief comes straight out of my own life. I’ve always thought of myself as an unbeliever: I trust evidence and the scientific method.

Despite this, I’m also totally convinced that I had a psychic uncle. Sceptical friends have used every argument they can think of to discredit my spookiest memories. They say I’m not recalling correctly, or ‘cherry picking’ anecdotes. If I were them, I’d say that too. But I also know my uncle was psychic! This dichotomy shaped much of Sara’s confusion in Dead in Time.

Oh, boy – I wish I had a writing routine! Because I’m also a university lecturer, I have to look for times to write. Sometimes it’s at night, sometimes it’s on a weekend, and often it’s on the train between London and Bournemouth.

I wish I had written Hit Man by Lawrence Block. It’s a series of short stories about a man named Keller, who’s an ordinary guy who happens to kill people for a living. I love the contrast between the banality of Keller’s life and the dispassionate evil he commits on a regular basis. I love the way he travels to White Plains, New York, to meet a cheerful matron named Dot, who gives him lemonade and tells him who to kill next. I love the fact that stories about a hired murderer can be so charming and whimsical. It’s a surprise – and that’s what good crime fiction should be.