My name is Thomas Enger, I’m the author of the Henning Juul series which consist of five novels in total (Burned, Pierced, Scarred, Cursed and Killed). Cursed is just about to be released, while Killed will be out in the UK some time in 2018.

I have also written a dark fantasy young adult thriller which roughly translates from Norwegian into The Evil Legacy, a book that so far hasn’t been translated to English. You can find me here at my website,  www.thomasenger.net and on Twitter as @EngerThomas. You can also LIKE my FB page.

I’m also a composer, and you find examples of my work on my Soundcloud page:

Good question. I really don’t know, to be honest. Maybe it’s because I like the genre a lot, and that it was crime fiction that really got me hooked into reading some 120 years ago. Nowadays I read just as much “ordinary” fiction as crime fiction, but as my heart and mind is a lot more tuned into the finer arts of murder and mayhem, so I think I’ll stick to that.

A lot of authors say they write crime fiction because they want to address certain issues in society, and they find that the crime novel is a great tool or vessel for that. Not me. I don’t want to impose my political views on anybody, I just want my novels to be entertaining and fun. I don’t mean to say that novels who particularly deal with social issues can’t be fun and entertaining, it’s just not me. 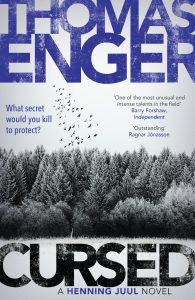 My stories usually start with the question “what if”. The idea for Burned, for instance, the first novel in the Henning Juul series, began with a crazy dream I had one night. I dreamt that an old man was out walking his dog one very early morning (I actually saw this through the old man’s eyes. Now what does that say about me??) and he stumbled upon this tent somewhere on the outskirts of Oslo. Curious as he was, he peeked inside, and there he found a young woman half-buried into the ground, dead, in what appeared to be a sharia killing (she had been stoned to death). When I woke up I said to myself: What if that really happened in Oslo? Wouldn’t that be a great start to a crime novel?

That’s just one example. I have plenty others. You just have to pick up my novels.

I usually start my days with the newspaper and a lot of coffee, and once my brain has gotten its fair share of caffeine and the kids have left the house, I sit down at my computer and get to work, usually at around 8 a.m. How I work depends on where I am in the process, whether I start out be re-reading what I wrote the day before, or if go more deeply into the chapters as a way of refining them. I enjoy all aspects of writing, but because it’s such an intense form of work, I have found over the years that I can’t work for more than three or four hours before I need to take a break. In total I spend somewhere between 4-8 hours every day writing, but I stretch that out over the whole day.

The Woods, by Harlan Coben. A cracking fast-paced read with an unforgettable plot. Also, Coben is very entertaining in his style of writing, and quite often I find myself laughing out loud when I read his stuff. Not many authors are that funny. I’ve read The Woods a number of times since its release in 2007, and it is equally impressive every time. So take a bow, Mister Coben. One day I hope to be as good as you.