I always wanted to write fiction, but somehow it took me until the age of 47 to get around to it. What can I say? I’m easily distracted. And having three children in rapid succession is a pretty big distraction. So instead of writing novels, I was a freelance journalist for twenty-five years, writing for national magazines and newspapers (high point: interviewing celebrities in far flung places, low point doing ‘battle’ in an Ipswich nightclub dressed in an inflatable sumo wrestler costume).

In 2010 a combination of a) my children being older and less demanding (physically if not financially) b) print journalism going into steep decline and c) an enjoyable but fiscally irresponsible four-year stint in Spain coming to an end, created a perfect storm of conditions for finally getting on with that novel. Over a period of five insomnia-fuelled months I wrote The Mistress’s Revenge, about a woman who spectacularly unravels when her lover ends their affair, and starts stalking him and his family. Thrillingly, this was bought by Transworld publishers and was followed by The War of the Wives and Someone Else’s Wedding. All three are dark, contemporary women’s fiction, published under my formal name, Tamar Cohen.

In 2014 I switched to psychological crime, marking the shift by changing my writing name to Tammy Cohen (which is what most people call me anyway). The Broken was my first crime novel followed by Dying For Christmas and First One Missing.

My latest psychological thriller, When She Was Bad is published TODAY, on 21st April!  When She Was Bad consists of two separate strands. In one an American Professor of Clinical Psychology re-lives a sensational child abuse case she was involved in many years ago. In the other, a bullying boss is introduced into a workplace in London in which one member of staff is keeping a long-buried secret (forget Domestic Noir – Office Noir is where it’s at!). Only right at the end, after a sickening murder, does it finally become clear how the two strands are linked.

I loved writing women’s contemporary fiction, but crime is different in that it gives me the chance to push boundaries and cross lines. My first three women’s fiction books were all about ordinary people in crisis situations. I was constantly asking myself – is this how I would act in that situation, is this credible? With crime, I’m often writing about abnormal people behaving in extraordinary ways, which means my warped imagination gets given free rein. It’s no longer about what’s probable but instead about what’s possible. That’s hugely liberating. Even so, it took some getting used to. The first time I killed someone in one of my books, I vacillated for so long and felt so stressed and panicked, it was almost as if I was doing it for real!

I spent many years interviewing people for newspaper and magazine features – grieving parents, people who’d committed crimes and then turned their lives around, mothers of missing children, women married to abusive men, sons of abusive mothers, people who’d been double-crossed or betrayed, who’d been victims of fraud or stalking or online grooming. All that feeds into my writing.

But the true answer is that anything and everything informs my books. I always find it funny, that question everyone gets asked: ‘where do you get your ideas from?’ because really the question ought to be ‘where don’t you?’ Ideas are everywhere. Every newspaper headline, every news item, every bit of gossip your nosy neighbour brings round should be enough to trigger something, some germ of a thought that makes you think, ‘and what if X were to happen next…’ Ideas are the easy bit. It’s the writing that’s so hard. 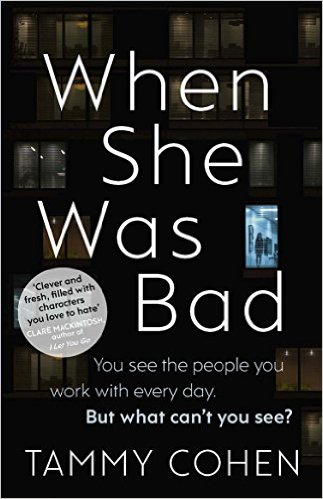 My ‘routine’ has been different for each book I’ve written. My first novel was written mostly in the early hours when I was going through a bout of insomnia, and still trying to cram in paid journalism work during the day. My second book was a disaster as I failed to follow the excellent advice everyone gave me to have a first draft completed by the time my first book was published. Instead I was distracted by everything about the publication process with the result I was trying to write my second book at the same time as the reviews and feedback for the first book started to come in. Cue major writing meltdown. Cue also a first draft that took eighteen months and had to be rewritten from scratch. For the current Work in Progress, I’m attempting a new regime where I force myself to write ten thousand words a week for the duration of the first draft. I’m nearly at 80,000 words, but have no clue what the hell has happened for the last 79,950 of them.

For a long time I wrote on the kitchen table due to lack of space, but now my kids are older, I shuttle between their bedrooms depending on who is away at uni, or travelling South America, or camped at his girlfriend’s house. I aspire to having a study where I don’t have to share a desk with either last night’s dinner plates, or teenage detritus (which normally includes at least one pair of festering socks) and can line up my foreign editions proudly on the shelves instead of stacking them in boxes in the loft, prompting my partner to have sleepless nights about the state of the floorboards/joists. Once at my appropriated desk, I can lose whole hours and days to following up random links on Twitter, so I often use an app called Freedom which blocks me from the internet for an hour at a time. Sometimes I’ll cheat and use my phone to go online, but luckily (!) my eyesight is getting too atrocious to read for too long on such a titchy screen.

I don’t tend to read a lot of whodunit police procedurals, although there are brilliant writers out there who do these amazingly well. I’m more drawn to the books that deal with the psychological side of crime – what makes someone cross the line and put themselves on the wrong side of the law? What are their relationships like? What kind of background to do they come from? And what are the effects of that crime on the victims, the victim’s families, the perpetrator’s families, the wider community? I loved Louise Doughty’s Apple Tree Yard because for me it combines a page-turning mystery with a narrative that explores the darkest, most hidden recesses of the human psyche and breathtakingly good writing. And I’d love to have written You by Caroline Kepnes, just because it’s so fresh and original and unexpected.

When She Was Bad is published by Transworld TODAY, 21st April 2016. GET IT HERE.