My Top Stationery On The Road

Lulu Allison is the author of Twice the Speed of Dark, published in November by Unbound. It is her first novel. She is currently working on a second novel. 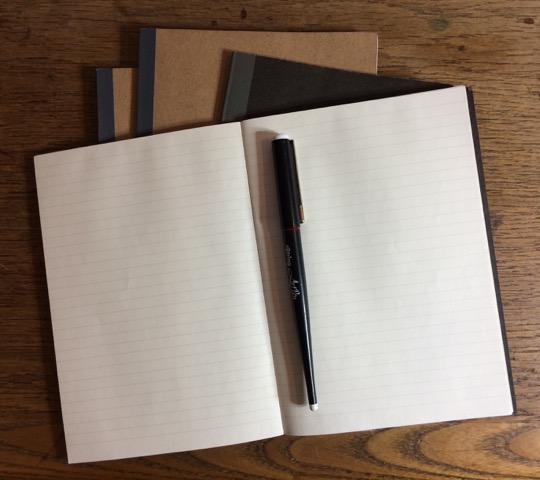 Like many of you, I am sure, I get a great deal of pleasure from new notebooks. There is a sense of optimism about a new book, all those clean pages waiting for ideas, for words, for plans, for sketches. Unsullied with attempts and failures, unmarked by scratching out and spelling mistakes and never-completed lists.

There have been many false dawns and possible contenders, but after years of research I narrowed it down to two favourites – the Seawhite’s of Brighton A6 hardbound sketchbook for drawing and a Muji soft-cover A6 that fits in any back pocket for writing and book notes. 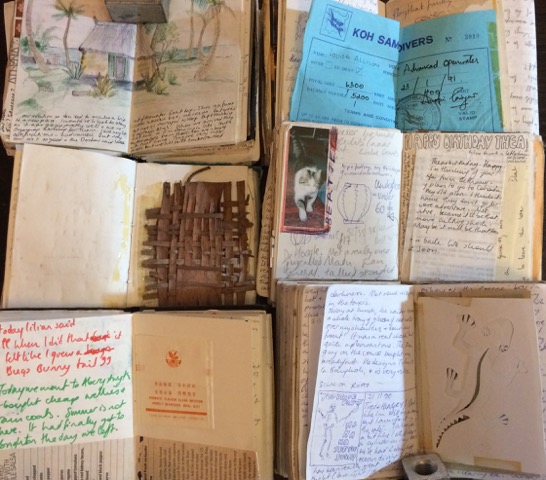 These tattered and battered books live in a box under my bed, picked up all over the place, filled up even more all over the place. They were travel journal, shopping list, handy language notes and useful phrases storage, journals of family life and sketch books. Before I somewhat belatedly discovered the wish to write actual books, they were where I described scenes, transcribed quotes from books I was reading or noted down snippets of conversations over-heard on buses. 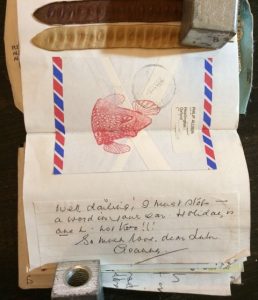 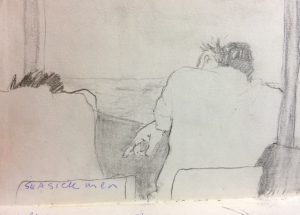 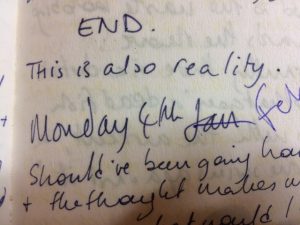 I wrote translations and useful phrases when I lived in Amsterdam, lists of places to visit in New Zealand, revision notes for my scuba instructors exam in California. There are photos and bus tickets, drawings, maps, messages and letters from loved ones. Time filled in transit sketching other passengers (see Seasick Men!) There are pictures by my young daughters and hair-tearing frustrations with my teenage daughters. There are the phone numbers and addresses of people I met fleetingly in a back-packers hostel and of people who remained life-long friends.

The examples above are from a time before I discovered that all I wanted to do was write books. 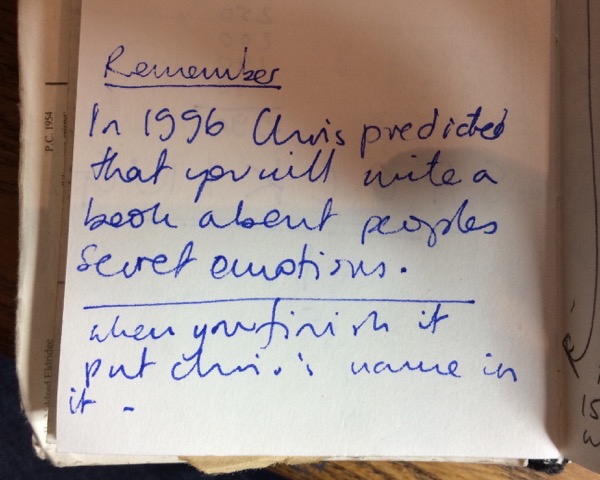 When I was in Sydney in 1990, I stayed at a backpacker’s called The Pink House, where I met a guy called Chris. Chris predicted that I would write a book about people’s secret emotions. It turns out, much as I scoffed at the time, that Chris was right. Twice the Speed of Dark was published in November – a book about the private ravages of grief.  On the next page from the one in the photograph I wrote ‘apparently he thinks I will write strongly and vividly about people’s secret emotions’. I hope that I have indeed done that!

I did not put his name in it as unfortunately I had forgotten this prediction – it seemed so unlikely and so outlandish at the time. I was someone too impatient to make a piece of art that took longer than an afternoon and though I loved books, never considered writing one until, unexpectedly, I started writing one twenty three years later. I would have put his name in it had I remembered. Clean pages don’t reward with these sorts of discoveries, do they?

I still keep a constant notebook, thinner and lighter, some of its duties overtaken by my phone. I still can’t leave the house without paper and pen. Most of my images now remain in the digital realm. No phone numbers are transcribed into the backs, no hand-drawn calendars. I use my phone and its camera as a visual diary. As a result I have some beautiful images (and a few digital sketches.) But I regret that they are not tied to a time and place like those in my old notebooks. It’s not the same. The heft of a book, the physical order of it ties it to the narrative of the times, the narrative of the path that we took together. Digital is great but is seems so… stationary.

I am hoping that using the magical powers of social media, I may be able to track down Chris from 1990. He was living at the Pink House in Sydney, though I think he was from Brisbane. He was slim and dark haired, about 5’ 8 or so, as I remember. If you get the chance to share this, that would be great! Long shots can happen!