Top 10 Awesome Books That Influenced Me As A Writer

I recently took part in THE Book Club’s ‘What Writers Read’ Event on Facebook (still ongoing, until Dec 9th!) and it was quite the eye-opener! It’s fascinating to see what my fellow authors and favourite writers love to read. We must have the best job in the world … As an author, freelance writer and script editor for movies, I am in the privileged position of being able to read for work! Amazing.

So without further ado, here are the top 10 books and stories that left a lasting impression and influenced me to become a storyteller: 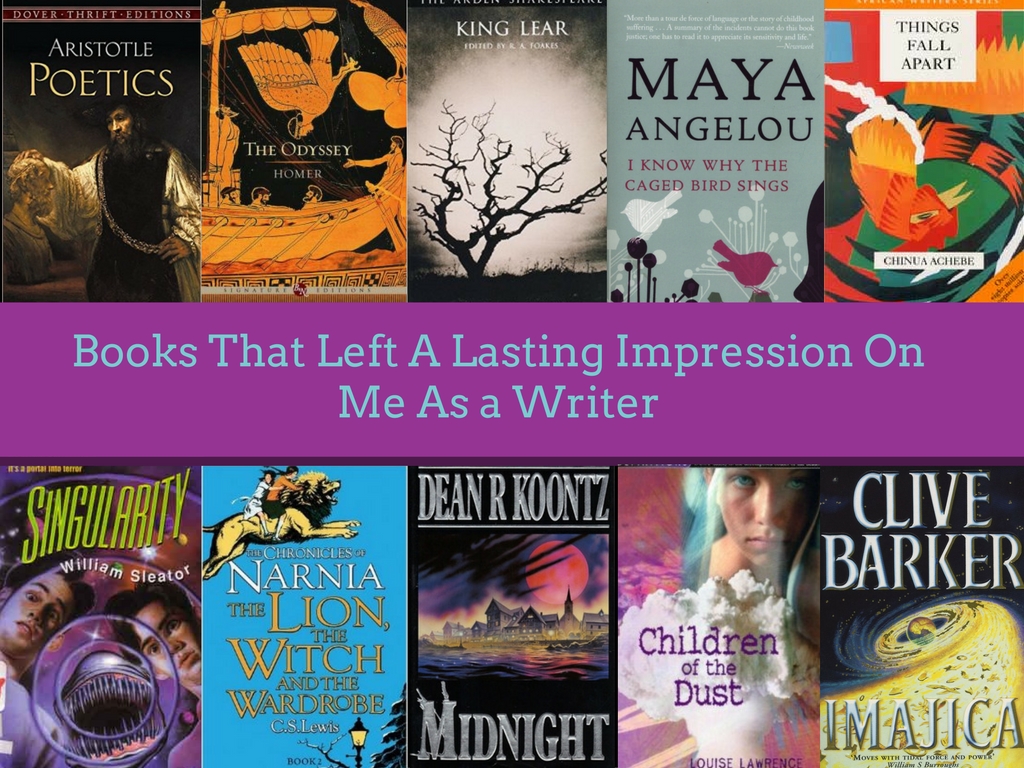 It’s hard to believe just how OLD this book is, yet it still remains relevant. This book lays out the foundations of creative works, such as character and plot –just as fascinating are the various controversies surrounding exactly what he means by this (and how much is lost in translation and history). I like to try and re-read this every 5-10 years or so, I’m due another!

2) The Odyssey by Homer

The original ‘quest’ narrative, it’s easy to see how Odysseus’ epic journey has influenced books and movies, especially those in which a hero or heroine must go on a voyage of discovery (literal or metaphorical). In my opinion, every writer should have a read of this one as it makes one’s life SO much easier in terms of understanding narrative. There’s no need to read a fancy, hard-going version either if you don’t want to; there’s been some brilliant adaptations, including comic book versions.

3) I Know Why The Caged Bird Sings by Maya Angelou

We were assigned this memoir for English Literature A Level and it became part of my personal journey as a young and scared teen Mum. Though Angelou and I had little in common other than our mutual young parenting status, her story of overcoming her underprivileged background made me realise my life wasn’t ‘over’! I could still be what I’d always wanted to be – a professional writer, just like her.

Okay, this is a play, but my first exposure to it was reading it! The story of a vain old king who allows himself to be flattered by his two eldest daughters with agendas versus the honest third, younger daughter really struck a chord with me. It made me realise so many people prefer falsehoods over the truth. The play also began my lifelong love of wordplay and dramatic irony as both a writer and a reader.

The story of Okonkwoo and his tribe in Africa plus the many hardships he has to face as a man, husband and father, this story really opened my eyes to the notions of differing viewpoints. Like many young people I had many polarised views of relationships, right/wrong etc but this book challenged me to look at situations from another person’s point of view. This was so valuable to me as a writer.

A cult classic YA sci fi novel, I got this book from a bargain bin in a charity shop when I was about twelve. A tale of sibling rivalry and resentment, our protagonist Harry and his twin Barry discover time has been altered in their dead uncle’s shed, with one of them making a decision that will change their lives forever. This not only made me realise the nature of consequence in narratives, but started my love affair with twins and multiples, both on the page and in real life!

7) The Lion, The Witch And The Wardrobe by C.S.Lewis

EVERYONE knows what this is about (and not just because of its title). I loved the tales of Narnia when I was an under-10, but this one is my favourite because it made me realise the power of literary allusion. I went to a religious school, so immediately I could see the parallels between Aslan’s sacrifice and The Passion story. It made me want to find other allusions – and of course I did!

8) Children Of The Dust by Louise Lawrence

Growing up in the time of the Cold War and then the breakdown of the DWR, the USSR and former Yugoslavia, I worried a lot aboutapocalypse. This book started my lifelong love of dystopian and post-apocalyptic literature. I loved the strong female characters in this book, especially Sarah’s sacrifice for sister Catherine. It definitely started my bias towards strong female leads in the fiction I read AND write about, especially at bang2write.com.

I read this ‘Frankenstein’ tale as a teen and was blown away: a scientist attempts to test his serum for ‘superior’ beings on a small rural town with horrific results. People start to regress to animal-like states, or conversely ‘plug in’ to computers. This book was WAY ahead of its time – the internet was not even in every home yet, never mind social media – and provided me with the insight as a writer that genre fiction could contain HUGE, ambitious ideas and issues. But more than that, this was a gory and terrifying ride!

This is a very adult dystopian fantasy that I read far too young so it totally fried my brains! Barker tells the story of various realms in which Earth is known as ‘The Unreconciled Dimension’ as it has forgotten magic exists. This means there’s magical wars going on that spill into our realm, yet we don’t realise. Violent, sexy, even scary, IMAJICA is not for the faint-hearted – but as a fourteen year old, its epic, stand-out ending made me realise the real power of ‘twists in the tale’.

What a brilliant bookish trip down memory lane … What is YOUR top 10 list of books that have left a lasting impression as a reader or writer (or both!!)? Over to you …