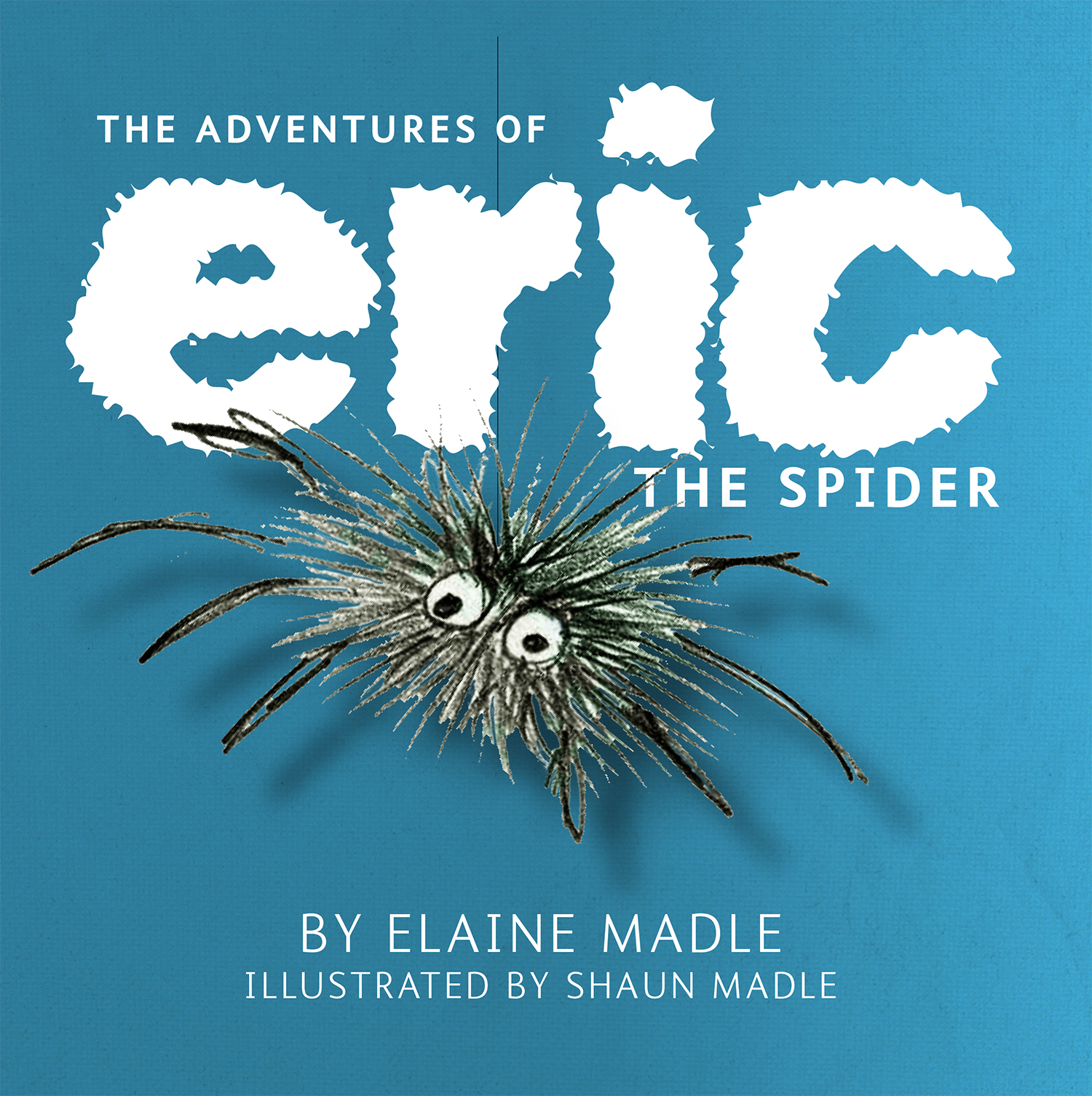 I think this feature has become the one of the most popular on this blog – Wee Girl Reviews! Plus we’ve been sent a LOT of picture books lately, which is great for us as we love them.

For those of you who don’t know, my daughter Emmeline, aka ‘Wee Girl (2)’ is 6 years old and a tiny book blogger. We read picture books together at bedtime, so Emmeline can give her opinion on them.

Emme’s been enjoying half term this week. She’s been swimming with her Dad and yesterday we all went for waffles and ice cream!

Eric may only be a little spider, but that doesn’t stop him from having some big adventures!

When a spider, with big, long, spider legs, is spotted behind a curtain he seems a little scary. Luckily, he is quickly caught in a box full of socks and named Eric.

But when Eric steals the socks (and a bike!) and goes on the run it is up to a diligent policeman to find the right sock-footed spider, stop Eric and rescue the bike!

Join Eric on his adventures as he escapes with some socks, flees from a birthday party, and goes camping on a very, very wet day in this beautifully illustrated rhyming book. 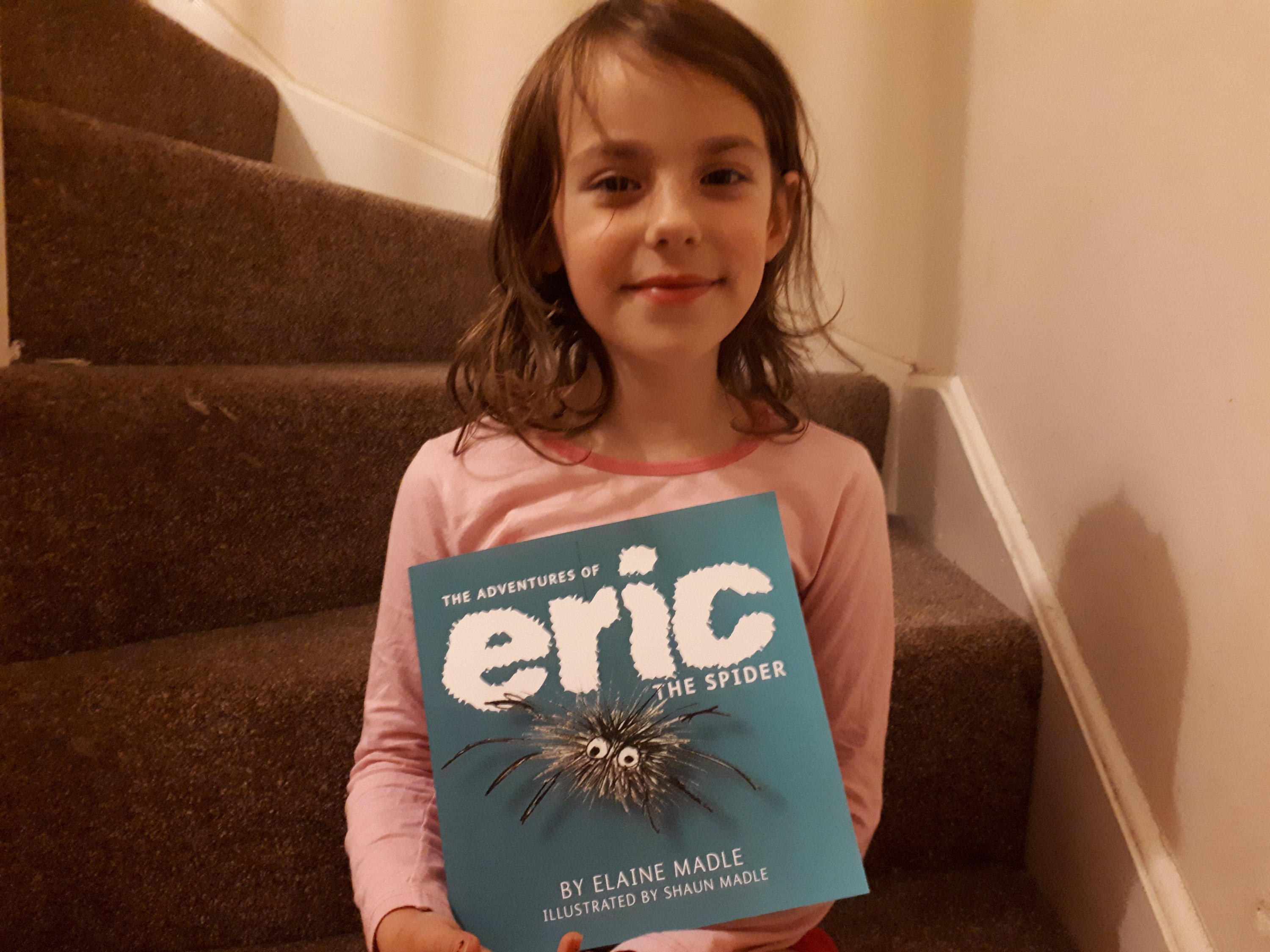 Eric The Spider is a book about a spider who has very big adventures. Here’s what Emme said about it:

‘Eric is hairy and scary, but also funny.’

‘Eric is a bit naughty, running away from the police.’

‘The pictures are really cute.’

‘A spider can’t ride a bike! He has too many legs and not enough pedals.’

‘I would Eric fly pancakes for dinner, I bet he would like them.’ (This started a long conversation about cooking dinner for spiders, Emme’s sister Lilirose reckons fly noodles would be a winner, too).

I’ve always had a soft spot for spiders, so was looking forward to reading Eric The Spider with Emmeline. The book is actually three stories: Eric The Spider; Eric Goes Camping; and Eric Has A Birthday. In each one, Eric has a big adventure, usually making a mistake of some kind, which he then has to out right, including the human narrator.

Eric The Spider is a rhyming book and whilst the metering doesn’t always quite work (especially in the first story), the language is appropriate and easy for a young child to read. The stories themselves are really well pitched and really fire a kid’s imagination.

I found the first story a little bit odd, but this was Emme’s favourite. Emmeline didn’t seem to notice that Eric is sometimes small enough to fit in a matchbox and sometimes big enough to ride a human bike! What was most important was that it captured her imagination;  Emmeline and her sister had a long chat about the events in the book and even drew some of them later, too. My favourite was Eric Goes Camping.

Eric The Spider is a fun book that has plenty to offer in terms of firing a child’s imagination. Plus no one can resist a spider in socks, surely! Recommend. BUY IT HERE.

Living  in Essex,  Elaine  Madle works  as  a support  worker  for adults  with  learning difficulties.  In  her spare  time  she loves  creating  stories especially  since  becoming a  grandmother  for the  first  time. Her  brother  and illustrator  Shaun  Madle who  has  always been  supportive  of her  writing    has provided  a  series of  unique  watercolour illustrations  in  order to  bring  her characters  to  life.