How I Wrote The Coven (As Lizzie Fry) – PART ONE 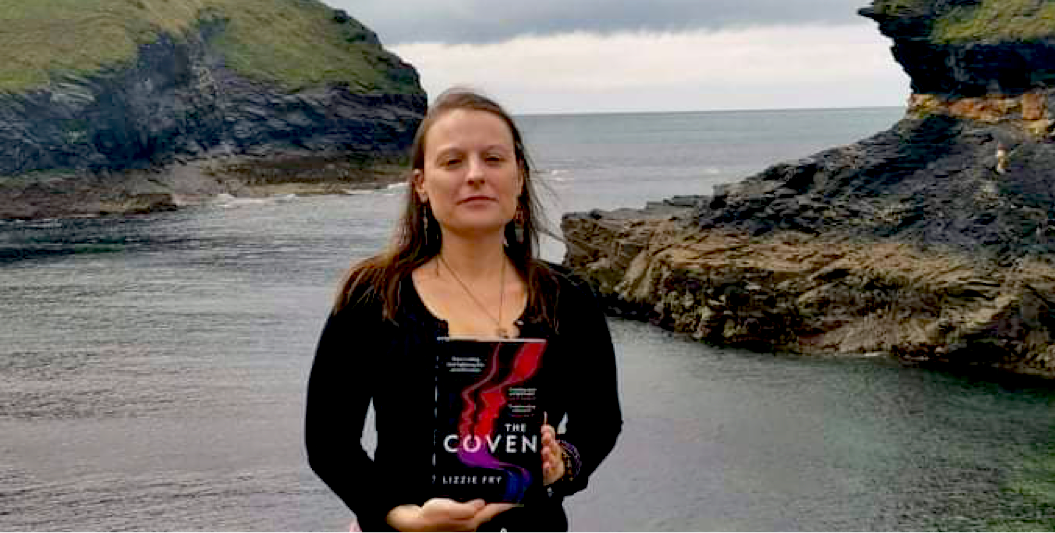 The Coven is out TODAY in paperback!

Just in case you don’t know, I’m Lizzie Fry as well as Lucy V Hay (you may have noticed I’ve rebranded this blog!).

Though I’m still writing thrillers (as with my LVH books), my Lizzie Fry books are HIGH CONCEPT … and first in line is The Coven, a book that places the supernatural and a global witch-hunt at its heart.

Of course, for my LVH fans, you’ll find some familiar elements … not least feminism, politics and of course my beloved Westcountry. The Coven starts in Devon and takes us into Cornwall before racing off around the world.

In fact, in the pic above I’m standing in the harbour in the village of Boscastle (aka Kastel Boterel in Cornish). Three MAJOR events happen in Boscastle in The Coven. When I was researching, I wanted the book to be as visual as possible so I decided to make use of my screenwriting background.

I also spent of lot of time talking to screenwriters who’ve worked in the studio system in Hollywood. I asked them how I could ensure important plot points could be memorable for readers. Their advice?

Concentrate on and name your set pieces.

What are set pieces?

For those that don’t know, set pieces are those big, action-packed events in big, blockbuster movies that can ‘standalone’ because they have a beginning, middle and end. Often they appear in the trailer.  If you think of your favourite blockbuster movie, chances are the moments you like best are set pieces.

This lit a fire under me and I spent AAAAAGES watching Hollywood blockbusters and deconstructing them. I soon noticed my screenwriter friends were right. Each set piece told a ‘mini story’ in their own way. Also, the plotting point of each set piece became very obvious, so much that each suggested a name or title for what was going on and how it contributed to the plot as a whole.

This lead me to write – and name! – the following set pieces in the book:

There’s lots more in The Coven, but these are the three set in Boscastle, Cornwall. I discovered naming my set pieces forced me to ‘focus in’ not only on the point of what was going on *in the moment* but how it contributed to the story as a whole.

Of course, no spoilers … so I won’t tell you what exactly happens in each set piece. These were my three favourites to write, especially Attack of the Feral Tweens.

If you follow me on social media, you’ll know I have three kids including two incredibly feisty daughters. Needless to say they acted as my inspiration for this set piece in The Coven.

There’s even a moment when I pay tribute to them when the characters do something in particular … If you have already read the book and think you know what it is, drop me a line or your suggestion in the comments!

More From the ‘How I Wrote’ series:

10 Female Antiheroes That Influenced my latest crime novel, Never Have I Ever

How I wrote my crime debut, The Other Twin

How I wrote Skyjack, a post-apocalyptic novella

How I wrote Love You To Death, a short story

How I wrote The Retribution of Elsie Buckle, a short story